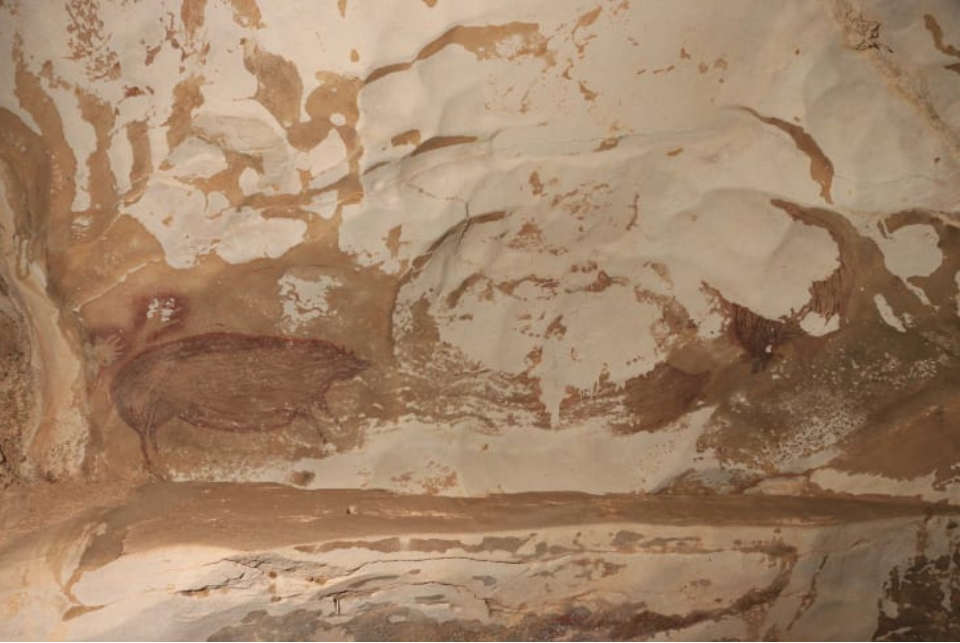 Archaeologists working on the site on the island of Sulawesi in Indonesia have discovered what is said to be the world’s oldest depiction of an animal-  a figurative artwork of a warty pig.
Discovered in a cave in the island and said to be at least 45,500 years old, the art done with red ocher pigment depicts a warty pig watching other warty pigs fight or otherwise interact.
Warty pigs are still common in Indonesia and the one painted on the ceiling of the cave measures 187 centimeters (6 feet) in length and 110 centimeters (3.6 feet) in height and is a red or mulberry color.

The island of Sulawesi in Indonesia has in the past seen other such discoveries including a cave art depicting a hunting scene dating to 43,900 years  found in late 2019.The same team of archaeologists in 2014 found human hand stencils, which were dated to 40,000 years ago.
While it is very difficult to date cave art, archaeologists do this for  rock art made in limestone caves by measuring the radioactive decay of elements like uranium within the calcium carbonate deposits — sometimes called cave popcorn — that form naturally on the cave surface.
In the case of this latest discovery, a small cave popcorn had formed on the rear foot of the pig figure after it had been painted indicating that the painting had been done prior to 45,500 years ago.