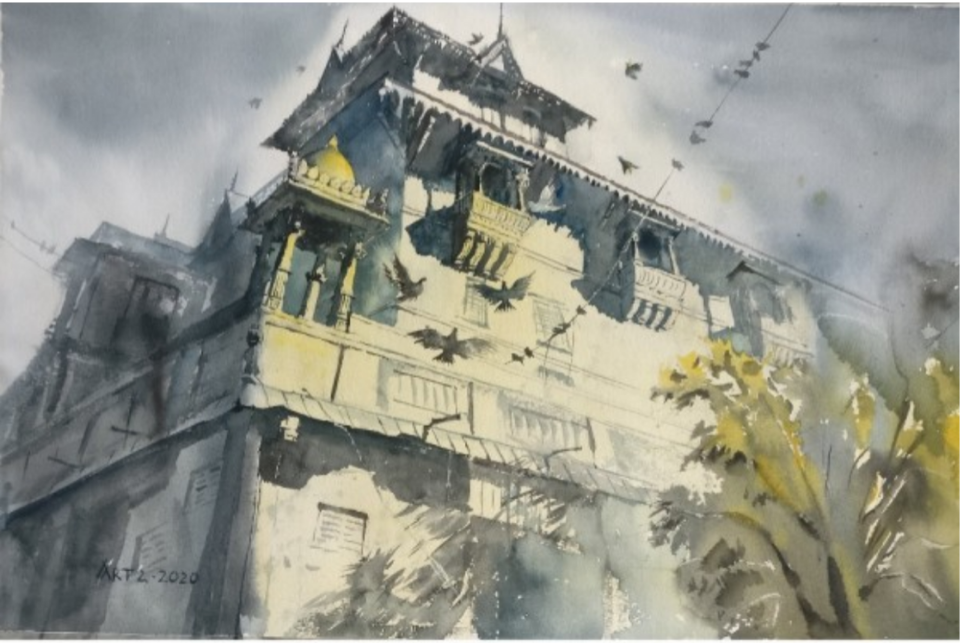 In the days filled with uncertainty, it is Art that can give us a sense of calm and seem like the light at the end of a dark tunnel. As we bravely continue to march ahead, Kalakriti Contemporary brings an exhibition that has emerged in these times. ‘Art in the Time of COVID-19’ presents an expansive series of watercolours by artists Aarti Patel and Anand Bekwad.

The virtual exhibition which is an effort to showcase what an ideal world it is when the human presence is limited in the open surroundings. These idyllic scenes of nature, villages, towns and rail yards appear like everything in the world has come to a stand still, except for the nature which is reclaiming its space. As we had witnessed in certain recent news reports where animals have come out on the roads and the cities at a time when we humans are closeted inside our houses. It gave us a message that it is not the virus that is killing us; but it is us, the human race which is the sole reasons for this malady.

Aarti Patel’s paintings are a testament to this fact where we see deserted buildings, thatched houses, forests are perhaps the most beautiful when there are no humans around. Aarti, a homemaker turned painter is a self-trained artist who has now decided to pursue her passion. Her mesmerizing compositions belie this facet of her life as her brushwork and an innate sense of aesthetics appear like the work of a seasoned artist. Inspired by her surroundings and the city of Ahmadabad she renders them beautifully in her paintings as a means to show the world what a locked-down world would look like. Made during these days of lock-down, the series presents her vision of a beautiful vicinity, showing that maybe this pause isn’t all that bad.

Keeping the theme of a world that has come alive in the days of lock-down, Anand Bekwad’s watercolours are visible possibilities of an ideal world we would like to live in. With scant human presence, the cityscapes, forests and villages instill a sense of awareness that all is not lost and there is still hope for the mankind. Another facet of Anand’s visual repertoire is the way he captures the mood and atmosphere along with the architecture and social fabrics of the cities and heritage sites that he had visited. The depiction follows the evolution of cities that have been the genesis points of religious and cultural centers. Anand paints these as vibrant landscapes filled with energy and life, attempting to capture their historicity and distinctive character.

We can not escape the ravages of Corona, but we can sure witness the memorable works that are emerging which are inescapably of this moment without describing it.