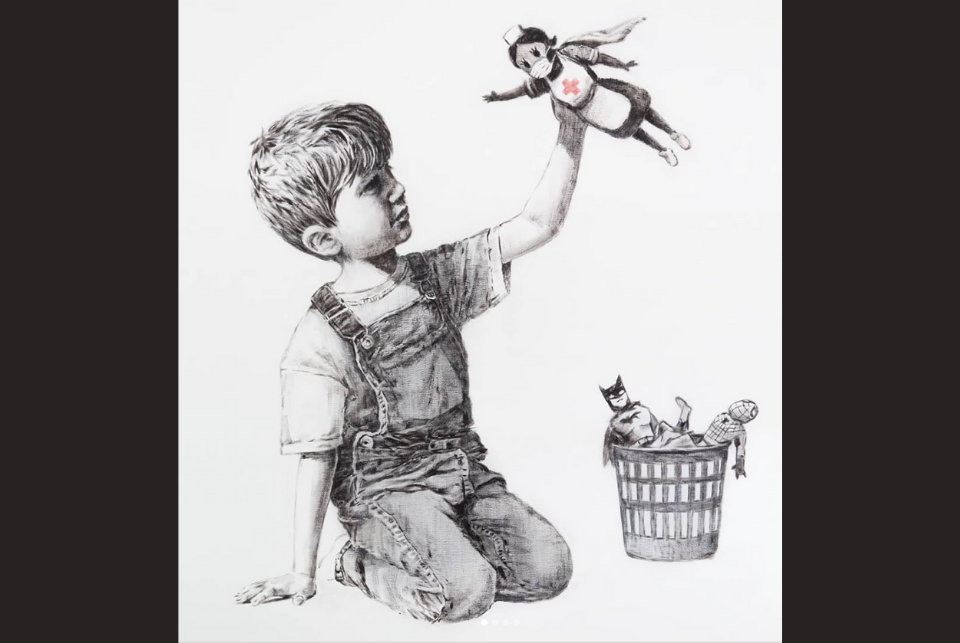 A new artwork by Banksy, the acclaimed anonymous British street artist, has appeared at a hospital in the UK which shows a young boy kneeling by a wastepaper basket with discarded Spiderman and Batman model figures in favour of a new favourite action hero – an NHS nurse, a media report said.

The largely monochrome painting, which is one square metre, was hung in collaboration with the Southampton General Hospital’s managers in a foyer near the emergency department, the BBC report said on Wednesday.

In the artwork, the nurse’s arm is outstretched and pointing forward in the fashion of Superman on a mission.

She is wearing a facemask, a nurse’s cape, and an apron with the Red Cross emblem (the only element of colour in the picture).

The artist left a note for hospital workers, which read: “Thanks for all you’re doing. I hope this brightens the place up a bit, even if its only black and white.”

The painting will remain at Southampton General Hospital until the autumn when it will be auctioned to raise money for the NHS.

“Our hospital family has been directly impacted with the tragic loss of much loved and respected members of staff and friends,” the BBC report quoted Paula Head, CEO of the University Hospital Southampton NHS Foundation Trust, as saying.

“The fact that Banksy has chosen us to recognise the outstanding contribution everyone in and with the NHS is making, in unprecedented times, is a huge honour.”

The artwork is now on view to staff and patients on Level C of the Southampton General.

Tyler’s pieces, all created on found objects off

"I tend to think of landscapes as affecting us mos