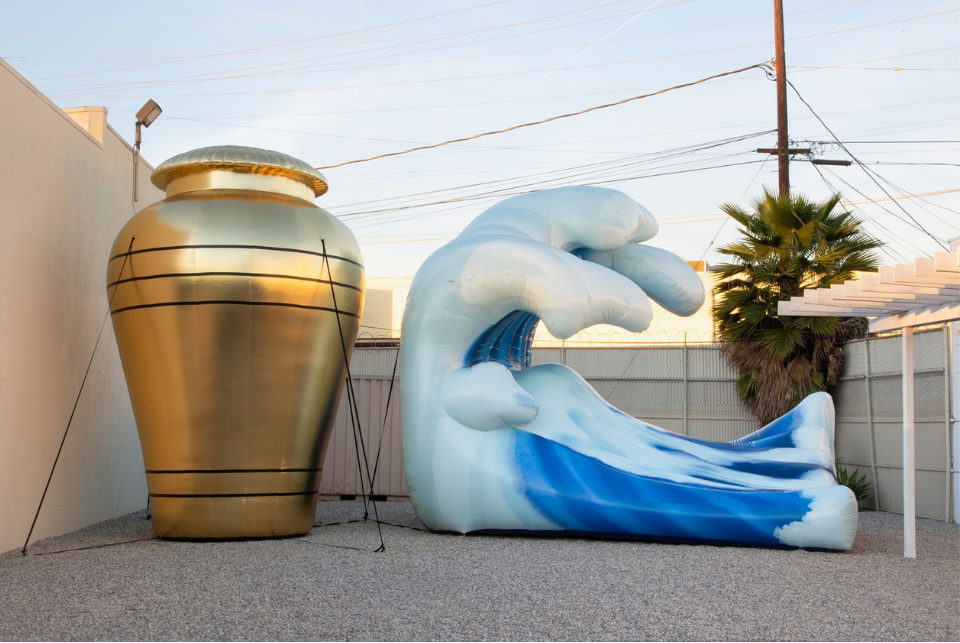 How to mourn the loss of a loved one?

“The grief is an ocean, no, the grief is Saturn, bobbing in the darkness, waiting to swallow the stars, with dirt between its rings, the residue of you. No, the grief is a house, a tower, a mansion, a palace for you made of what you gave and were given, a tribute to your love because you carried our love. The grief knows that we miss you so much the hurt could fill this planet and the planet could fill this urn, and it would never be enough,”

writes Kim Nguyen, a curator and head of programs at the CCA Wattis Institute in San Francisco in the curatorial note for the latest exhibition of Indian Candian artists Divya Mehra, who has found her answer to this question in two 20-foot-tall giant inflatable wave and urn emojis.

The only work at her new show “The funny things You do” at Night Gallery in Los Angeles, it is expressive of the mourning or stages of grief that the artist experienced upon her father’s death in 2015.

“Those two emojis have taken up so much space for me over the past few years,” says Mehra to NYT. Her father, Kamal had founded the first restaurant serving North Indian cuisine in Winnipeg, the capital of the Canadian province of Manitoba.

The Herculean work is also a reflection on the widespread grief that blanketed the world as humankind stood helplessly and witnessed the devastation it wrought. A staggering two million people had become the victims of the deadly attack by the time Mehra’s show opened in January.

As remarkable is the title of the work- “here at least we shall be free (build yourself a Taj Mahal for common folks OR a simple set for funniest home video),” which refers to the Taj Mahal, the sublime marble mausoleum that resulted from Shahjahan’s grief for his beloved dead wife Mumtaz Mahal.

Mehra’s practice is multimedia spanning different mediums such as sculpture, writing, performance, sound, video that is also often an alternative commentary on diasporic identity politics and racism in the western world.

A mangled base of a Ganesh sculpture which was stolen by thieves from the entry of her father’s restaurant when he died made an appearance in a conceptual portrait of her father in a 2016 show.

In 2020, while working for her upcoming show at MacKenzie Art Gallery in Regina, Saskatchewan, the artist found out that Norman MacKenzie, the collector in whose memory the museum was named had facilitated the theft of an 18th-century Indian sculpture from an active Hindu temple so that it can become a part of the museum’s collection. As the director agreed to repatriate it, her own work- a bag of sand, reminiscent of what, in one of the movies, Indiana Jones used to replace an idol he had gotten hold of.

Divya Mehra completed her M.F.A. in 2008 at Columbia University. This is her first solo show in the US while she has previously showcased her work in numerous solo and group shows at MoMA PS1, the Queens Museum, Mass MoCA’s. Her most recent national touring exhibition, Afterlife of Colonialism, a reimagining of Power: It’s possible that the Sun has set on your Empire OR Why your voice does not matter: Portrait of an Imbalanced, and yet contemporary diasporic India vis-à-vis Colonial Red, Curry Sauce Yellow, and Paradise Green (2018 – 2020) where both installation and title evolved as the tour unfolded, culminating with a presentation at the National Gallery of Canada, Ottawa, ON, Canada (2022). Mehra was shortlisted for the National Gallery of Canada’s $100,000 Sobey Art Award in 2017. Here is an official introductory video from the Sobey awards about her work.

Divya’s “The funny things You do” at Night Gallery in Los Angeles through March 13.