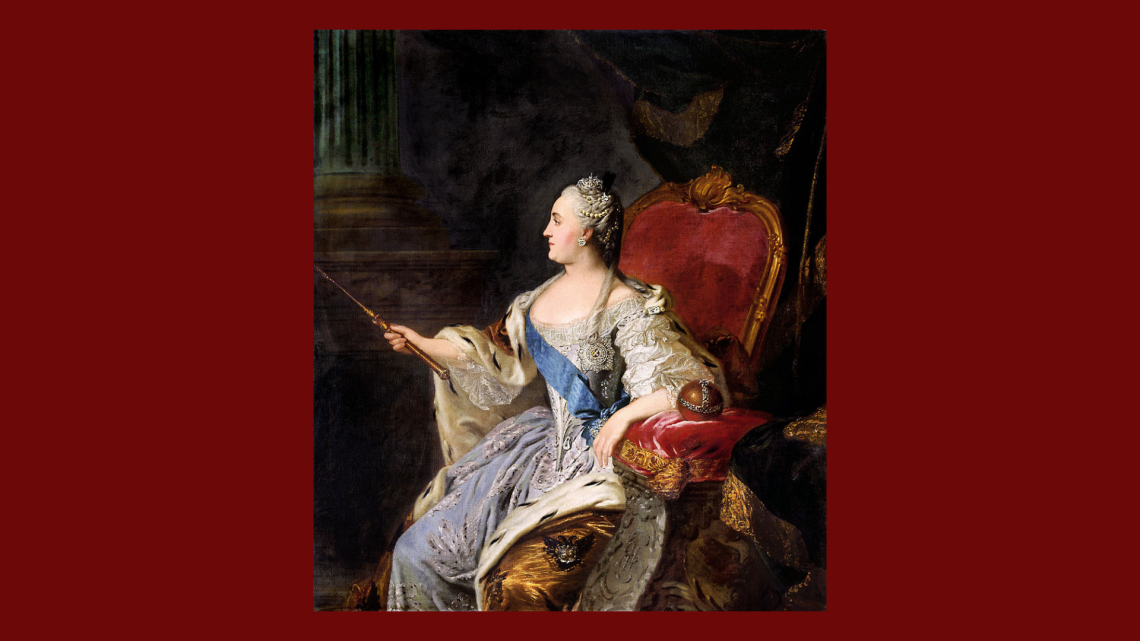 Because she did so many reforms during her rule of over three decades, it is hard to not get lost in the monumental reign the majestic Russian queen, Catherine II or Catherine the Great as she is popularly known.

On her journey from an obscure Prussian princess, to an empress consort, a throne usurper, and then to an unconquered Queen, she ultimately validated her worth by ushering Russia into an awakening broader than what was, at the same time, being experienced in the other countries of Europe. The Russian Age of Enlightenment under her regnant envisioned beyond championing the intellectual and philosophical movement and obtained a further modernization of all aspects of Russian life. She expanded her territories, reformed bureaucracy, established laws, and adopted numerous progressive changes springing from her liberal ideas. Stunning Western Europe, she rose in her ranks from a dilettante to a powerful political player.

Such grand was her reach that she found admiration from greatest of French philosophers including Voltaire, whom she never met in person but corresponded tirelessly with for fifteen years. She was also very close to Denis Diderot. When the publication of Encyclopédie went under threat from the French government, she suggested he complete his great work in Russia under her protection. This was an era where reason started to take precedence over rituals and superstitions and it led to a widespread progression in the practices of literature, philosophy, science and the fine arts. Consequently, the European Philosophes, whose approval all sovereigns sought, expected the queen to also, with her military and political prowess, champion the cause of the art. And boy she did!

Indeed, her embodiment as Minerva, who symbolized at once military prowess, legislative wisdom, and patronage of the arts, is no surprise. Catherine too loved arts and everything to do with it. Personally, she was one of the prolific writers of her century. The first works of children’s literature ever published in Russia were the stories she penned for her grandsons. She also wrote memoirs, journals, national history, and dozens of play for which she built various venues including exquisite structure within the Winter Palace.

“I am passionately interested in books on architecture; they fill my room, but even that is not enough for me,” she once wrote to the French Philosophe Friedrich Melchior Grimm. She, obviously, did more than just reading. During her reign, she provided for the makeover of more than two hundred older towns and built as many new towns.

Renaming the Academy of Fine Arts as the Imperial Academy of Arts and commissioned a new building in the neoclassical style that today is a great heritage of Russian history and culture. She also founded the Imperial Theatrical School to train actors and directors. For the advancement of music, she sent domestic composers like Berezovsky and Bortniansky abroad to study the art of music composition and also made way for first ever public concert in Russia in 1764.

The apotheosis of her allegiance to art, however, came when her passion merged with politics. Two years after she seized the throne from her estranged husband, she began in earnest on an escapade of acquiring art. A collection with tours de force from would be a token of Russia as a land of artistic inclinations and cultivated taste, and the financial extravagance to procure such prestigious pieces would display the kingdom’s wealth. It would qualify her as an enlightened despot. In her much famed Nakaz or Instruction, she promulgated


“Decency requires that Affluence and Magnificence should surround the throne . . . and for all of which, Expense is not only necessary but highly useful.”