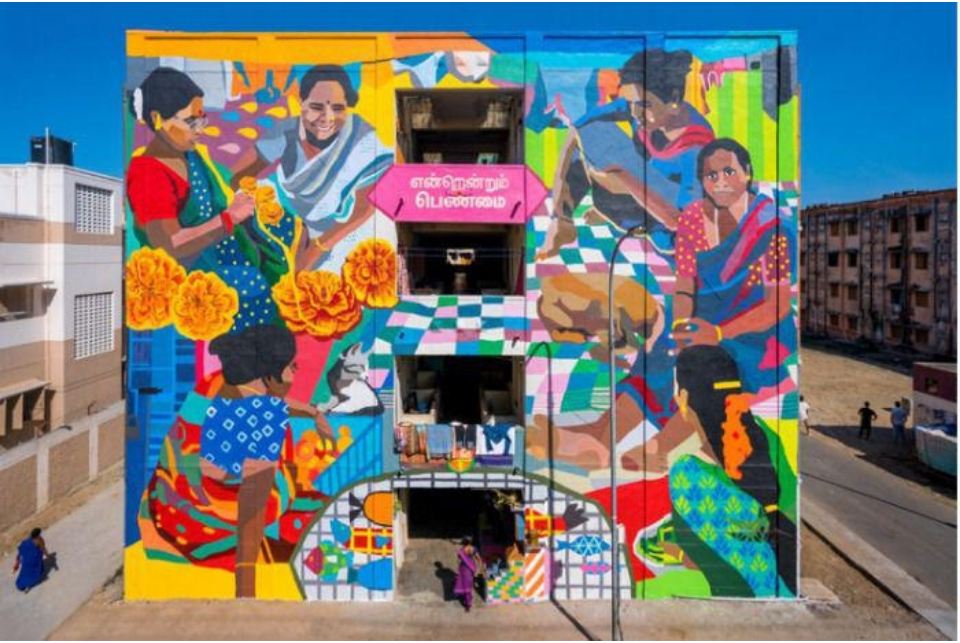 Kannagi Nagar, famous for being the “First art district” of Chennai, is now getting a facelift with the Greater Chennai Corporation and its Resident Commissioner (South), Dr Alby John Varghese, making efforts to have four to five facades painted by local artists.

In 2020, Kannagi Nagar Awas was formed as a resettlement and rehabilitation area of Chennai for the Tsunami victims with around 80,000 being relocated here. It is a microcosm of Chennai with the usual problems including infrastructure, drug related cases, alcohol abuse, unemployment, crime against women etc.

The people of Chennai city had a different perception of Kannagi Nagar and this was what the Greater Chennai Corporation and its Resident Commissioner wanted to change.

He took the initiative and brought in Italian contemporary art curator, Giulia Ambrogi who is the co-founder of St+art Foundation.

The project was taken forward with the support of Asian Paints, Greater Chennai Corporation and Chennai Smart City Limited.

“One of the major ideas behind this project was to change the perception of Kannagi Nagar among the neighbourhood and for that matter Chennai city also. It is not just paintings, it is a rejuvenation project,” Alby John while speaking to a new agency.

He added, “Kannagi Nagar is a cross section of Chennai and people from all parts of the city live here. Our problem was how the people of Chennai see them and wanted to change the mindset and that’s exactly what is happening now. In that way we are happy.”

The project has increased the confidence level of the people of the area and more than a rehabilitation settlement colony, Kannagi Nagar has now turned into a beautification project.

“The perception of any town, colony or rehabilitation place is important. This project of converting one of the most backward areas of Chennai into an ‘art district’ is indeed welcome and this has lifted the morale of the people living here as well as the attitude and mindset of the outside world towards them,” says Rajesh Viswanathan, an art curator and journalist

Alby John and his team are not resting on the laurels they have received from the civil society and are planning more paintings this year as well.

John said, “This year local artists will be painting four or five facades and we are planning cultural programmes as well but the magnitude will be less owing to the Covid 19 pandemic.”