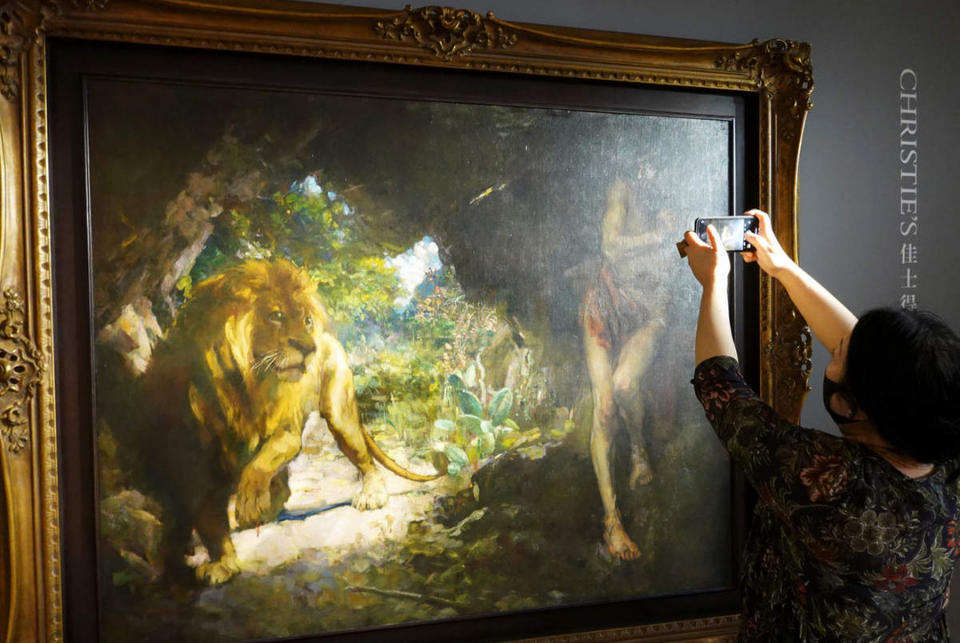 A magnificent artwork by Chinese Modern master Xu Beihong (1895-1953) will be up for grabs by auction house Christie’s.

As one of the most influential artists of the 20th Century, Beihong paved the way for Chinese Realism and pioneered modern art education in China. ‘Slave and Lion’, carries an estimate of US$45,000,000 – 58,000,000, the highest estimated Asian artwork ever offered at auction. The painting is a ground-breaking example of the artist’s thematic creations, and signifies a watershed moment in modern Chinese art history. It was painted at the height of his creative output, and is regarded as one of his most significant and signature creations. Beihong’s largest oil painting is still in private hands, the artist’s thematic oil paintings are extremely rare on the market and no more than six have ever appeared in history.

The story behind ‘Slave and Lion’ originates from ancient Roman mythology and ‘Aesop’s Fables’ – the slave who tried to run away was captured by his master, and thrown into the Colosseum to be executed by the lion. However, to everyone’s surprise, the lion recognised the slave and did not attack him. It transpired that the slave had removed a thorn stuck in the lion’s paw during transportation. The moving account paved way for the slave and lion to be set free. The story serves to praise the essence of humanity and our intrinsic nature towards compassion and redemption for all.

In order to underscore the historical significance and influence of this work, ‘Slave and Lion’ will be presented in an exclusive single-lot evening sale, immediately after the conclusion of the 20th and 21st Century Art Evening Sale in Hong Kong. Following the previous world records set by Christie’s for Su Shi’s ‘Wood and Rock’ and Sanyu’s ‘Five Nudes’, the sale is an testament to Christie’s ability in sourcing the most important Asian Art masterpieces.

Francis Belin, President, Asia Pacific, commented “We are privileged to be offering this exceedingly rare work which holds great cultural significance. The sale of this museum-quality masterpiece marks a monumental moment in auction history and continues Christie’s tradition in offering the greatest masterworks of Chinese Modern art. As the leading highlight of our Spring season, it joins a formidable line-up of Asian and Western masterpieces, sourced by the strength and unparallel expertise of our market-leading team here in Asia”.

Nature Morte at Frieze 2021 With Examples of Exhi