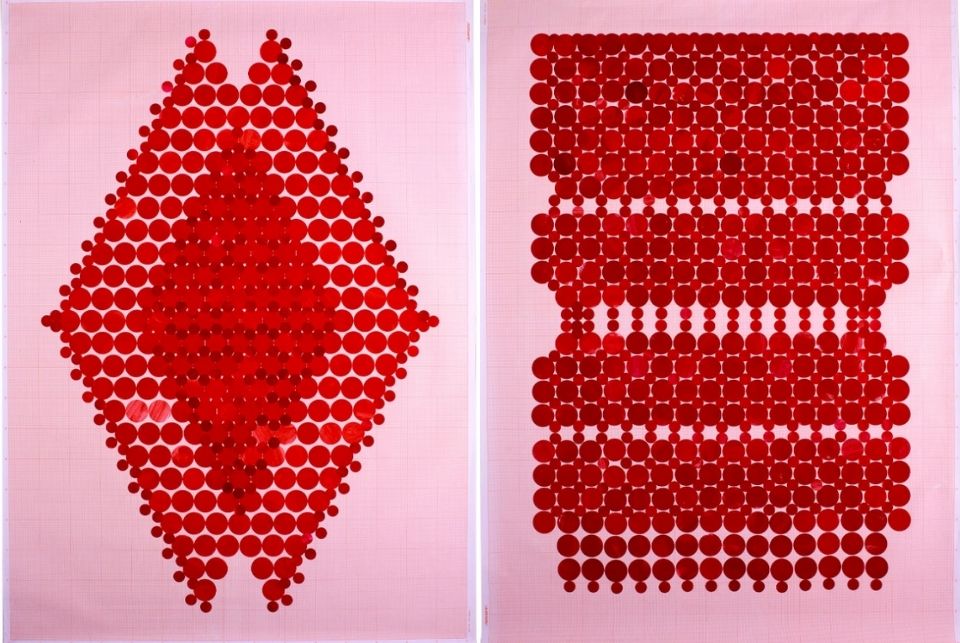 Code-switching, the ability to alternate effortlessly between two or more discrete sign systems, is a faculty practiced and perfected by all diasporic subjects, whose itinerant biographies commonly extend across national borders and between disparate linguistic and cultural contexts. To code-switch is to be multiple and relational, to embody and inhabit difference, to resist claiming origins and refuse the imposition of categories. As a methodology, code-switching is integral to Lubna Chowdhary’s artistic practice which has long sought to stake out a conciliatory middle or common ground between various binaries: art and craft, East and West, ornamental excess and minimal restraint, industrial and handmade, architecture and body, and object and image.

Chowdhary’s monumental Metropolis (1991-2017) consists of a mesmerizing display of more than a thousand small, handcrafted and lushly glazed clay sculptures that together scramble and synthesize her myriad sources, inspirations and references, which range from anthropological artifacts and mass-produced commodities to architecture, both modern and pre-modern, and both industrially and manually produced design objects like furniture and toys. These unruly hybrids triumphantly resist all attempts at taxonomy and categorization.

Gathered together in a sprawling cacophonous display that further confounds our ability to establish the origin and context of any individual unit, they are near impossible to place except, that is, in relation to each other, in their shared alterity. A quiet riot of multiplicity and difference and the inevitable everyday encounter with it, the work, as its title asserts, encapsulates the logic, pulse and thrill of city life.

Marking a notable shift from three to two dimensions, Chowdhary’s Certain Times (2019) consists of small groupings of variously shaped tiles—both industrially produced and commercially available and custom-designed and cut by waterjet—on wall-mounted shelves. Regardless of how they are fabricated, Chowdhary hand glazes each tile, its horizontality allowing for more precise designs and saturated colours than a clay object does. Following the architectural subtext of her three-dimensional works, these short linear arrangements of simple and complex geometries and patterns can be read as fragmented skylines or flattened cityscapes. But they can also be interpreted as linguistic or semiotic compositions, as coded phrases or sentences, each individual tile a lexical unit in an unfamiliar language. This suggestion of the syntactical or semiotic is condensed within a single frame in Chowdhary’s most recent ceramic works, such as the aptly titled Sign series (2020), which endeavors to develop a novel vocabulary of abstraction, one that sheds some of the referential weight of her past work without forgoing either ornament or colour.

Begun during a residency in Stockholm, Sweden, during the early months of the pandemic, the other works in “Code Shift” index a pivot in Chowdhary’s practice away from ceramics, the medium she was trained in and is best known for. They also reject horror vacui as both production and display logic, abandoning the space-filling sprawl of a work like Metropolis. The resulting works feel more meditative, centering and centered. Almost ritualistic in their seriality they seem a particularly apt response to the interminable sameness of life under lockdown. Regardless of the specific medium used, they are all marked by a flat, frontal focus, their forms, lines, vectors and patterns hemmed in by a rectangular frame. And like much of her previous work, they intentionally blur the line between industrial and manual modes of production.

For Switch (2020), Chowdhary used commercially available stickers to create shapes and patterns on pink graph paper. Each circular sticker was carefully and laboriously hand painted red resulting in subtle tonal variations across the individual units. Similarly, while the compositions were designed and refined in Adobe Illustrator the stickers were applied manually, using the paper’s gridlines as a guide. “Series 1” investigates the tension between the gestalt fullness of geometry and ornament’s capacity to deflate it.

Chowdhary does this by strategically filling in the interstices in regular arrays of large circles with smaller ones so as to embed a smaller opaque shape within a more porous larger one. “Series 2” has a more architectural feel, the shapes resemble spatial plans, the grids of circles suggesting a patterned floor. For Code (2020), Chowdhary used digitally designed templates to industrially cut boards into sets of smaller interlocking shapes which were then reassembled back into rectangular fields. The forms and patterns painted atop these jigsaw-like composites, in a palette as vivid and luscious as her signature ceramic glazes, often extend across the physical cuts, suturing them together visually. The result is a subtle but uncanny disjunction between the two layers of the resulting image, between support and surface, between underlying structure and emergent form.