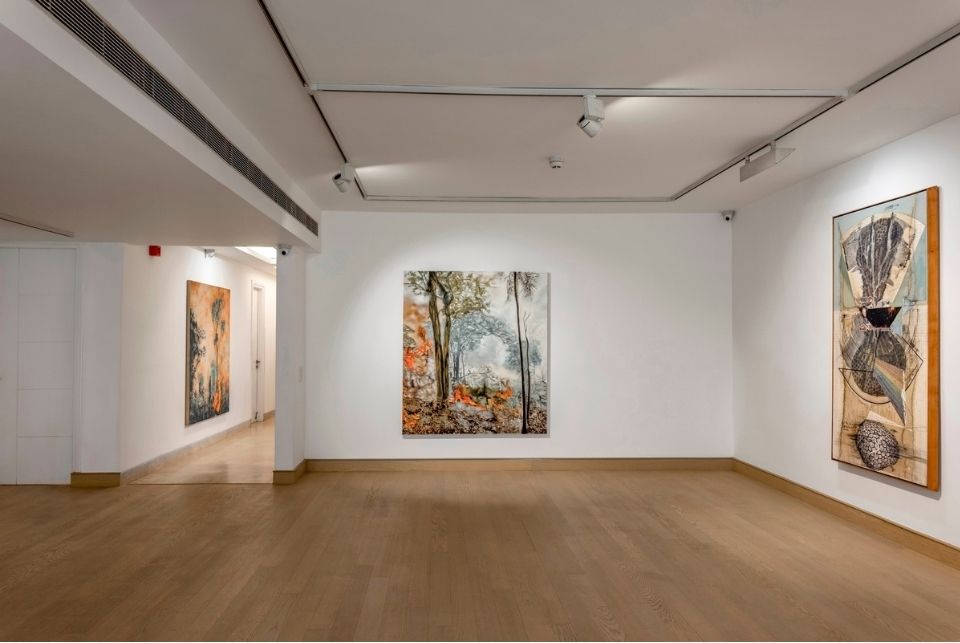 Two artists who may seem to have little in common can be brought together by specific works. In the present case, it will be done using paintings: a continuation of an on-going series by one and a radical new direction by the other. What they have in common is a notion of landscape that acknowledges extreme shifts that are taking place in the human condition and its relationship with Nature. Painting is always trapped by its reference with the earliest making of marks on the walls of caves, an embryonic state in which pictures and language were the same things, guided by a formation constructed through the landscape. The present works by Jitish Kallat and Subodh Gupta can be linked to those most primitive pronouncements through the inert act of representing Nature, both artists discovering strategies to hover over the fine line that separates Realism and Abstraction.

“Palindrome/Anagram” is the over-arching title Jitish Kallat has used for a series of paintings he started working on in 2017. A palindrome is a word or phrase that reads the same frontwards or backwards (such as Malayalam). An Anagram is a word, phrase or sentence that is formed from another by rearranging the same letters. Together, this title implies both a sense of mimesis and the re-ordering of reality in order to achieve this. One could posit that this is the essence of all art. Kallat’s components for his painterly puzzles are drawn from the diagrammatic and schematic recordings of a wide variety of sciences, namely the Natural Sciences, such as biology, geology, chemistry, astronomy, and others. As such, we can say they are tethered to landscape though this may extend into the heavens or descend into the subterranean realms. Through the mineral physicality of paint and Kallat’s exploitation of its properties for transformation, these paintings seem to be of the shadows of metals, fossilized traces of history, and the corroded evidence of previous lives. Kallat’s “landscapes” refer to the building blocks of the natural world and the principles which govern it. He uses the devices that humans have invented to understand nature as characters in his pictorial dramas.

While primarily a sculptor, Subodh Gupta has always continued to make paintings. Four new works, all entitled “Lonely City,” make a dramatic departure from his previous paintings, which had a close affinity with his sculptural works. Starting with found photographs of the fires in the Amazon rainforest in 2020, Gupta crafts atmospheric epiphanies which defy a concise interpretation. Here, landscapes reveal their hostile flesh, smouldering on the verge of recognition, only the barest traces of reality remaining. For the past few years Gupta has been making images of decaying flowers, first as watercolours and then as oil paintings. These works seemed hesitant, their compositions usually unmoored and noncommittal, as if the morbidity of the subject matter could not be avoided. Now, these works seem as experiments leading to these new landscapes, opening a door to a new vocabulary that affords readings both personal and political. While they are the antithesis of urbanity, these images posit loneliness that is existential.