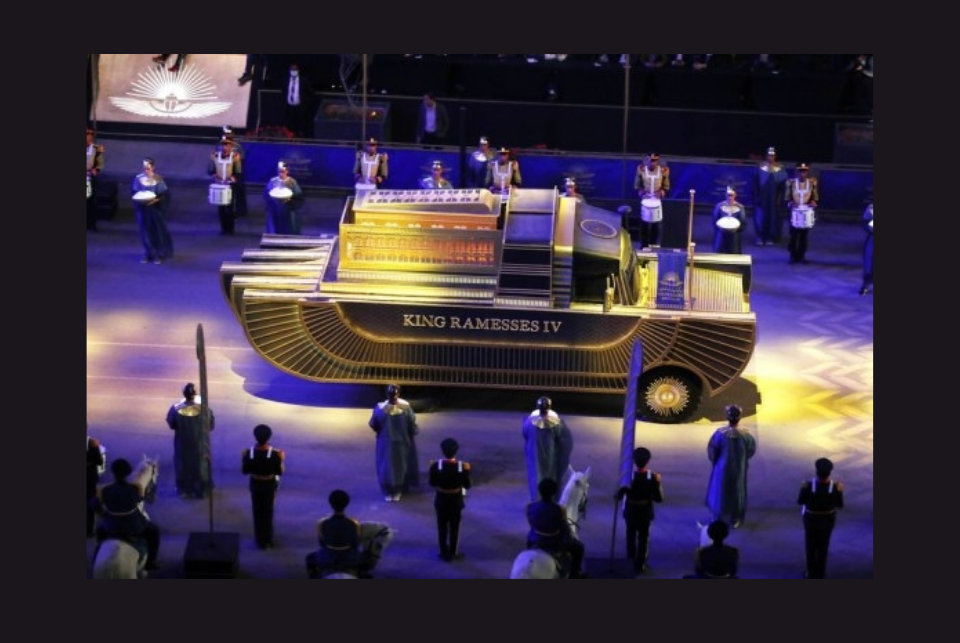 Authorities have moved 22 Pharaonic mummies from the Egyptian Museum on Tahrir Square in downtown Cairo to the National Museum of Egyptian Civilization (NMEC) in a festive parade known as “The Pharaoh’s Golden Parade”.

The festivity started on Saturday evening with 22 ancient-styled vehicles especially designed for the event, each carrying the name of the mummy of the king or queen inside, moving from Tahrir Square and escorted by parades of chariots, motorcycles and men and women dressed in ancient Egyptian outfits, reports Xinhua news agency.

The royal mummies belong to 18 kings and four queens from the 17th, 18th, 19th and 20th dynasties that ruled ancient Egypt over 3,000 years ago.

They include mummies of famous ancient Egyptian King Ramses II and Queen Hatshepsut.

About an hour before the parade set off, President Abdel-Fattah al-Sisi inaugurated the main hall and the mummies hall in the NMEC, accompanied by Minister of Tourism and Antiquities Khaled al-Anani, Unesco Director-General Audrey Azoulay and Secretary-General of the World Tourism Organization (UNWTO) Zurab Pololikashvili.

The Minister explained that the main hall of the NMEC contains 1,500 artefacts and it will be open for visitors the next day, while the mummies hall will be opened on April 18 to coincide with the International Day for Monuments and Sites, also known as World Heritage Day.

“It is a unique cultural, awareness, tourism event. It’s unprecedented and it shows that Egypt puts our civilization and antiquities on the top of our priorities,” Anani said in a statement before a ceremony started at the NMEC.

With joint efforts of the Unesco and the Egyptian government, the NMEC’s foundation stone was laid in 2002 and its temporary exhibition hall was opened in 2017.

The 22 royal mummies of the Pharaoh’s Golden Parade were discovered in two cachettes, the first of which was unearthed in 1881 and the second in 1898, both in Upper Egypt’s monument-rich province of Luxor.