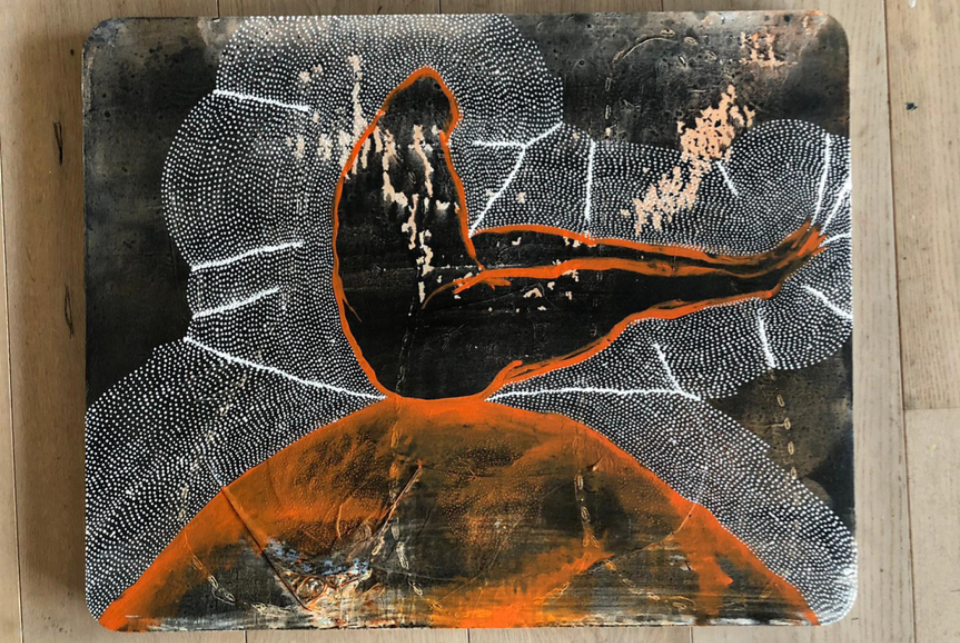 Marking a return to collaborative in-person exhibitions, four Indian art galleries- Chemould Prescott Road, Bombay; Experimenter, Kolkata; Nature Morte, New Delhi and Vadehra Art Gallery, New Delhi- bring together the works of 40 artists at a single venue. The collaborative exhibition project titled On | Site opens today for view at Bikaner House, New Delhi and will be on view till March 9.
Spotlighting the small places amid the grandeur of Bikaner House, the presentation by Chemould Prescott Road, Mumbai, titled ‘Entry, Only,’ is exhibiting
miniature solo and 2-person shows – that lend itself to the intimacy of the setting.

Artists will intervene directly with site specific work as in the case of Mithu Sen’s drawings; In yet another of the spaces, we present a juxtaposition between a painter – Jitish Kallat and a sculptor L N Tallur, wherein the painter paints large exploratory sculptural images on his canvas and the sculptor prints digital images on his bronzes; also included is an intimate viewing of Aditi’s Singh’s drawings and charcoals.
As a joint presentation between Vadehra Gallery and Chemould Prescott Road, Shilpa Gupta will intervene minimally and thoughtfully with a recently developed work which delves into distance, mobility and confinement which surfaced through the last year.

Experimenter Gallery from Kolkata presents Do You Know How to Start A Fire, a group exhibition of intergenerational women artists featuring work by Ayesha Sultana (b. 1984, Bangladesh), Biraaj Dodiya (b. 1993, India), Radhika Khimji (b. 1979, Oman) and Reba Hore (1926-2009, India) that resets itself on transient instances of deep personal reference, that are often realized in the seclusion of their own studios, usually inhabited by experiments, possibilities, erasures and experiences that shape their work.

Along with the group show, the gallery also presents a solo project by Prabhakar Pachpute, Lone Runner’s Laboratory. Through a new series of oil paintings, Pachpute continues his inquiry about exploitation of land and mineral resources in which he imagines the future of a post-mined and post industrial landscape.

Jole Dobe Na (Those Who Do Not Drown), a film by Naeem Mohaiemen, premiered in India at the Delhi exhibition. The film was conceived in response to a prompt given by Raqs Media Collective (for Yokohama Triennial 2020) to think about the afterlife of caregivers. In an empty hospital in Kolkata, a man faces protocols of blood, a subtly discriminatory office, and a vacant operating theater. His mind is on a loop of the last months of his wife’s life, when a quiet argument developed. When is the end of pharma-medical care, whose life is it anyway?

Nature Morte from Delhi brings for this exhibition artists of three generations working today propose abstraction as a correlative to current advancements in Science. Mona Rai, Bharti Kher, and Tanya Goel create artworks without subjects, pictures that are determined by the unorthodox materials from which they are made, images that coalesce as much in the mind as by the eye. These artworks can be paired with advances in the harnessing of cutting-edge theories such as nano-technologies, quantum computing, and genome sequencing. In addition, Nature Morte will exhibit works by Asim Waqif, LN Tallur, and Martand Khosla which expand upon this dialogue between Art and Science.

Vadehra Art Gallery is thrilled to present Memory Keepers, featuring oil paintings by Atul Dodiya, a comprehensive set of works by Pritzker prize-winning architect B.V. Doshi and a series of new paintings by Arpita Singh. As a joint presentation between Vadehra Art Gallery and Chemould Prescott Road, Shilpa Gupta will intervene minimally and thoughtfully with recently developed works, which delve into distance, mobility and confinement that surfaced through the last year.

The exhibition is on view from March 3- March 9 at Bikaner House, New Delhi.