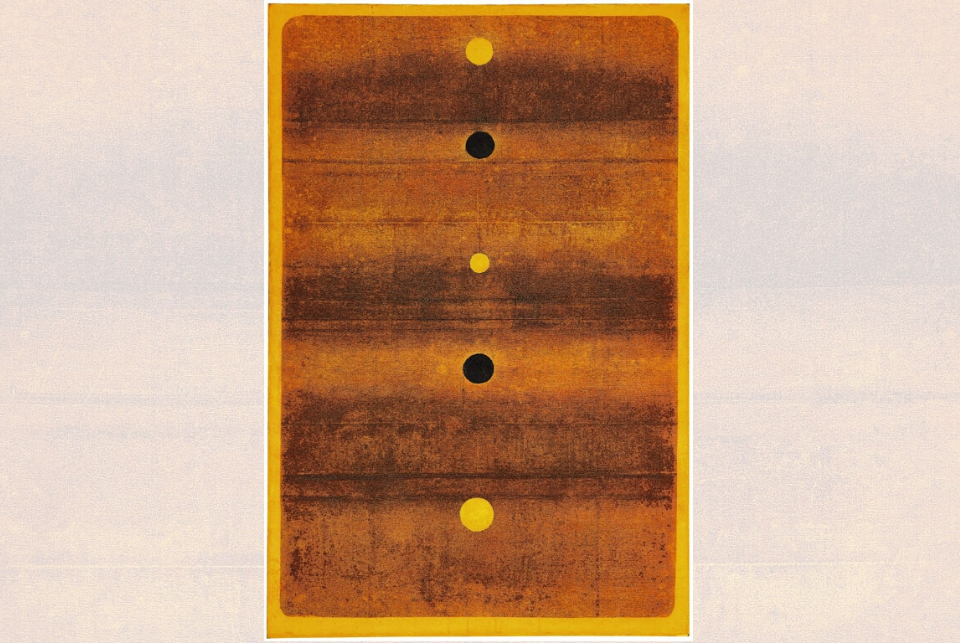 Promising to be a special event for art collectors, Sotheby’s second “Boundless: India” auction, slated to take place in Mumbai on November 15, will be led by a never-seen-before painting by one of India’s most important modern abstract painters, Vasudeo S. Gaitonde, which has been hanging in the home of actor Sabira Merchant for over 40 years in Mumbai.

She acquired the painting from Kali Pundole, one of the greatest Indian gallerists of the 20th century, in 1975, the year after it was painted. The master’s luminous Untitled (1974) can be read within the context of the space age: Five orbs are suspended in space like planets. The large vertical canvas is broadly divided into horizontal swathes of gold and bronze, in strips of colour reminiscent of the horizon.

Speaking to IANS, Shivajirao Gaekwar, Sotheby’s Deputy Director and Specialist for Modern and Contemporary South Asian Art, said the market for quality Indian art, despite the economic slowdown across the world, was quite strong.

“If one looks at the sales record of the past year, quite a few high value sales have been made. This itself gives you an idea about how the market is,” Gaekwar said.

Citing the example of artist Bhupen Khakar’s 1980 painting ‘Two Men in Benaras’, which the auction house sold for $3.2 million in June, Gaekwar added, “Now this is something that would have been unheard of for a contemporary artist two years back. Khakar is now in the same orbit as Husain, Raza, Souza and Gaitonde.”

Insisting that it is all about quality and the work’s place in art history that decide the price, the specialist in South Asian art observed, “Now if you ask why did Khakar sell for such a high price, the answer would be that of course, it is Khakar, but also the fact that the work is one of his most important and coming out paintings. That’s what people look for — rarity, importance, quality and what estimate you put on a work.”

Adding that the art market is thriving for quality works and great art pieces would continue to sell regardless of what the economic circumstances were, he elaborated, “We all know the difference between a buyer and a collector. The latter is guided by passion. If you are building a collection, and a work comes up which will fill the gap in the collection, why won’t you go for it?”

And the customer base? Has it moved from the traditional Mumbai and Delhi?

“Well, by and large the concentration is in those two cities, but thanks to technology, we have been witnessing a certain fluidity in that respect. You can be on Instagram and follow the entire sale or be in any remote corner of the country and still be in touch with what’s happening in the art world. New emerging areas include some cities down South. Not to mention, Ahmedabad is coming up really well,” Gaekwar said.

As the country witnesses several art residencies mushrooming even in smaller towns, Gaekwar said, “Better late than never. This is something that should have happened at least 30 years ago. All these are passion projects and good things are bound to come out of this.”

Upbeat about their business in India, he said, “We’re quite happy with what we have achieved in the past few years that we have been here. Our engagement with the country goes back to the time when we sold the first Indian object, in the 1700’s. As far as contemporary Indian art is concerned, we were the first international auction house to come to India in the 80’s and the first to have a sale in India in 1992.”

This article has been republished from an agency feed without any changes. It has been written by Sukant Deepak who can be contacted at sukant.deepak@gmail.com)