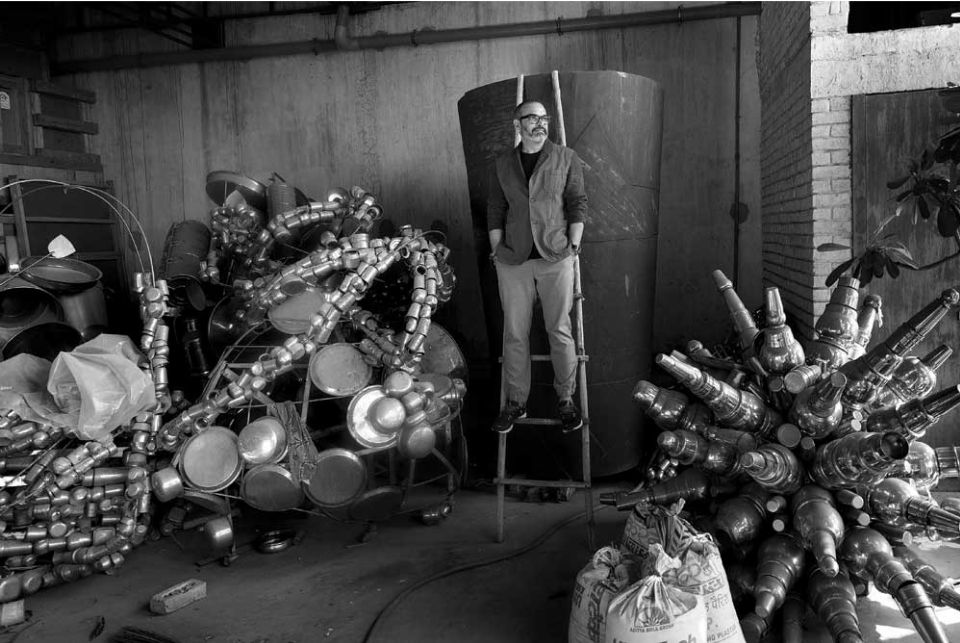 From brass utensils to stainless steel tiffins. From cow dung to buckets — in the world of one of India’s best known contemporary artists, Subodh Gupta, the universal derives from the personal even as the past and future emerges as a time of both hope and conflict.

Known for employing localised metaphors in some of his best known works — steel tiffin boxes, thalis and bicycles to reflect upon the transformation of the Indian social landscape, an exhibition of Gupta’s latest paintings along with those of Jitesh Kallat, titled ‘Confabulations: New Painting’ was recently held at Nature Morte in the capital.

Talking about his four new paintings, all entitled ‘Lonely City’, that started with found photographs of the fires in the Amazon rainforest in 2020, a dramatic departure from his earlier paintings, the artist points that the pandemic, and lockdown that followed taught us a great deal about ourselves and how we live in this world.

“Several things are changing on the planet — climate, behaviour of species — and yet we humans are always in is a mad rush to acquire and accumulate. In many ways this pandemic has indeed been a ‘portal’ from one way of existing into another, and that’s how I like to think about the movement within my own work too.

“When I started making work with stainless steel, it was very much about the economic change India was going through at the time and the disappearing use of steel among a plastic favouring the new middle class. So change and how we respond to it has always been a key theme in my work. As an artist, I may practice something for a long period of time, but I also don’t want to get stuck in it. My language is constantly evolving just the way the world around me is, and that’s what I respond to,” he tells IANS.

Adding that the period of lockdown was immensely productive for him, he elaborates, “It was a period when as a human race we needed to pause and look deep within ourselves. Artists have always been solo creatures and love to work in isolation. The world went quiet.”

Point to the fact that works by both Jitesh Kallat and him were exhibited together — with their much different styles and processes, and Gupta says Kallat is a contemporary and gifted painter. “Also, the show was curated by Peter Nagy, who is a painter himself, so both of us were in good hands. We have two different languages of course, but that’s a good thing otherwise what is the point of having a show together?” says the artist who has shown at some of the most important biennales across the world.

Currently working on five-six projects simultaneously— painting, sculpture and installation, he says: “I work across mediums, and like that flexibility.”

One of the most expensive contemporary Indian artists, whose work ‘Banyan Tree’, a life-size sculpture made from stainless steel, is permanently displayed at the National Gallery of Modern Art in New Delhi, Gurugram-based Gupta insists that he never thinks about who is at top and who is not. “As an artist, my job is to make and be stimulated by new ideas. I know to do only one thing in my life and that is art. It excites me and gives meaning to my life so that is why I keep doing it.”

In contemporary social and political times, when artists are often asked about the politics of their art, Gupta makes it clear that he does not make “political art”.

“But my art always poses a global question — of food, how we eat, what rituals surround it, what ideas and objects sit at tables across the world. In some ways these questions are the same across cultures. For me, to ask these questions is a way to build awareness about how we live on this planet,” says the artist.

For someone who brought the world on the same table by cooking at Art Basel as part of his performance piece, he smiles, “I’ve always said that if I wasn’t an artist, I would be a chef. Maybe they are not different after all. I love cooking and it’s as simple as that. I’m constantly trying new recipes and reading about those who take an interest in the topic. In fact the title of my Art Basel performance is from Charles Malamoud’s book. I was very taken by how he talks about the philosophy of Indian food and wanted to translate that into a performance. Perhaps my only regret was not being able to feed the average person through that. I hope to one day make it a public art project that is not specific to an art crowd,” says the artist who was born in Khagaul in Bihar.

As the conversation veers towards the current state of art schools in India, Gupta, a pass-out from College of Art and Craft in Patna says he is terribly saddened by the fact that nothing has changed in the past 30 years.

“The younger generation has a lot of potential, but in India, we see a serious lack of governmental support to art institutions. Some private players have sought to fill this gap, such as the Shiv Nadar school of Art, but we need to see many more of them. Perhaps even one that is initiated by artists themselves. I still remember that I was not given even a single class of art history in my six years of art school. Therefore, I am a great believer in self-learning actually.”

The artist, who did theatre for around five years feels that it has been instrumental in shaping him and he would even say that those years were his real art school.

“I used to act, do set design, make posters, and even sell tickets — so it was really a versatile education. It gave me the love for putting on a show. That’s where I picked up this idea of staging something for an audience. When you take that to visual art, you are your own most intimate audience. Even today, the way I stage my installations, they are big because they are loud, almost screaming – Look at me! So retaining that performative aspect of my training has been critical in the way I make art now,” says Gupta who is married to major contemporary artist, Bharti Kher.

Through the decades that he has been making art, Gupta says that there is a language that has developed over time. “Some things get simpler and yet others get tougher. The idea is to keep looking for that same thing over and over again, the very thin line between what is art and not.”

(Sukant Deepak can be contacted at sukant.d@ians.in)