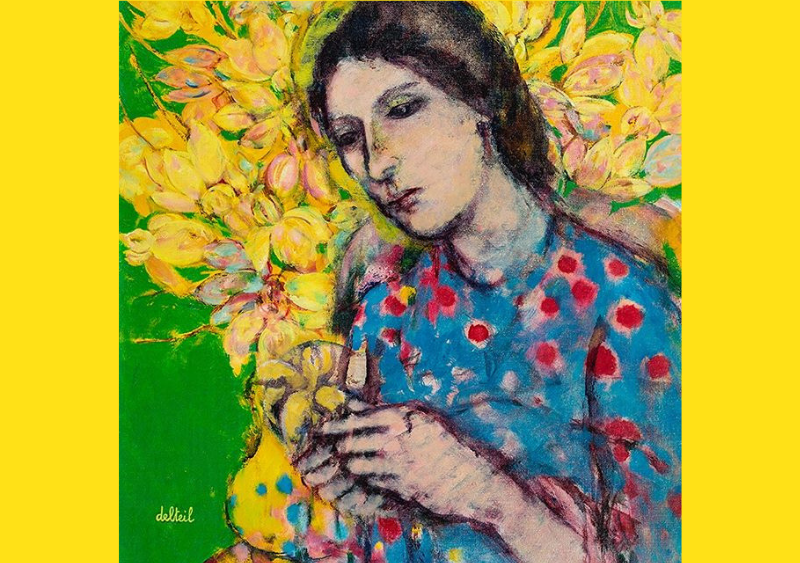 In 2018, art-curator and director of Art Alive Gallery Sunaina Anand visited the home of Indo-French artist Maite Delteil and discovered the paintings which put the exhibition “The Yellow Room” together. Doing justice to its title in terms of bright colors, “The Yellow Room is all about women- Single, naked, contemplative, maternal women, women who are friends and even those who aren’t. “At the end of the 1960s, I was mainly working in Japan. Looking into these paintings, I realise I was very much concerned with the search of vibrant colours simply applied, as Matisse was doing. I was also trying to depict intimate interiors to present models in gentle boudoirs, in a contemplative appearance, more than in a banal sentimental vision. At that time, I was impressed by artists like Berthe Morisot, Edward Vuillard or Pierre Bonnard,” said Delteil explianing why these paintings only have women.

Born in France in 1933, Maite Delteil studied art at École des Beaux-Arts in Paris and later honed her creativity in Spain and Greece on fellowships from the Government and Institute De France, and worked under painter Roger Chapelain -Midy and the engraver Robert Cami. In 1959, she received the prestigious Prix De La Casa Velazquez.

Created by the artist in the late 1960s, was exhibited. The 25-30 works in small format, dating back to the artist’s youth, had never been exhibited in India before. A 45-minute biographical film by Joy Banerjee, titled ‘Maïté Enchanted’, was also a part of the special preview. The paintings from the 1960s a show of Maïté Delteil’s drawings from the 1970s, which was curated by Ranjit Hoskote in Mumbai in December 2018.