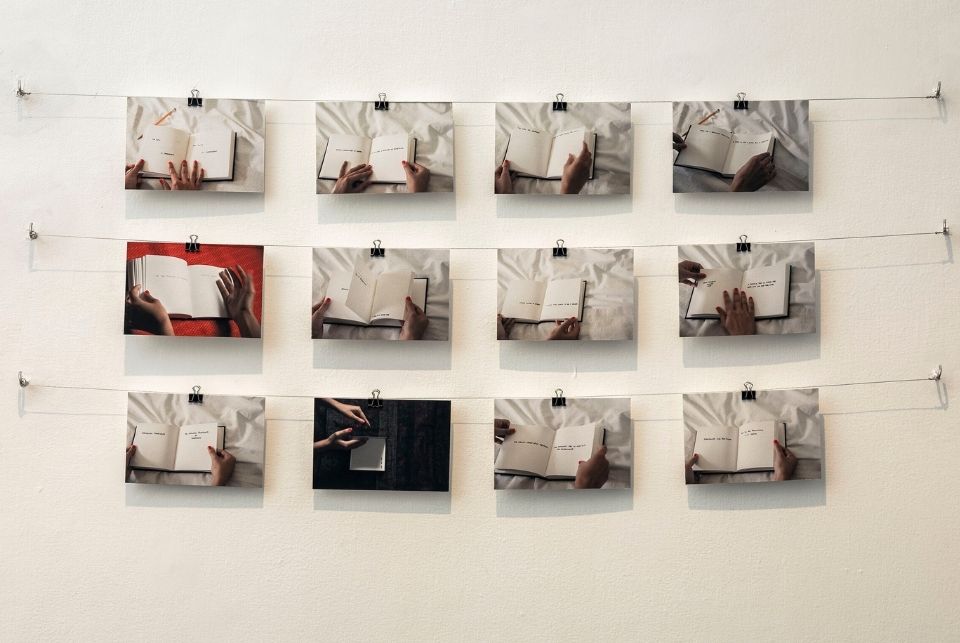 (ME)(MORY) sets a stage for interdisciplinary conversations around the nature of self- building by inviting empathetic and philosophical reflection on constructions of identity or experience. In this excerpt from her curatorial essay, Anand writes: “Since the self is as much remembered as it is present, its narrativization requires a sensitive and cross-sectional articulation of the self as ‘no longer’ and ‘not yet’ from where the ‘is’ emerges. The self-generating individual is a subject beset equally with conviction and vagaries, which are cognitively expressible in art, as in life, as symbol, as figure, as truth, as dream, as myth or as landscape. In (ME)(MORY), the artists approach the construction of these artworks as they might the construction of themselves, from a quasi-dream-like state, or an ecstasis, or states of overpowering emotion, seemingly shedding their exterior bodies for the visceral and whimsical world of within.” Interested in exploring the multi-sensory and multi-dimensional narratives of the self through world-building, memory, personal history, cultural consciousness and creative process, the show presents a perceptual collection of interpretations on the imagined or invented self, challenging the traditional literary genre of memoir by incorporating elements of possibility rather than just evidence.

For Anand, textuality is philosophical currency, meaning she considers our relationships with ourselves and the world around us to be formed by the imaginative and interpretative effort of “reading”. She asks: “If we are to grasp ourselves and each other as bodies of knowledge, might we ask what is more real: a world that is seen, or a world that is felt?” As these artists undertake the great experiment of the self, assembling narratives that are as rooted in fact as they are in fiction, Anand encourages us to embrace our engagement with aesthetic practices while surrendering our expectations of re-constructing the context in which the work of art is made – a prompting that brings artists and viewers closer to themselves, and in so acting, each other as well.

The show presents a significant body of work from each artist, with a notable diversity across media and materials, visual languages, techniques and creative intentions. Where Himali Singh Soin’s sensory and algorithmic assessment of the semi-colons used in Virginia Woolf’s novel The Waves is an immersive project exploring our relationships with continuity and macrocosms, Ruby Chishti’s representational sculptures are refurbished personal memories borne of contextual circumstances then extrapolated to larger, shared experiences. Rakhi Peswani’s fabric panels are an exposition of the inner theatre of creativity and the tediousness of channeling self-expression into skill, which offer a temporal counterpoint to Bakula Nayak and Apnavi Makanji, whose post-inspiration drawings are a figural self-study of the inter-dependent emotional–physical body and an erasure of inflated values in anthropocentric human forms respectively. Meanwhile, Biraaj Dodiya’s series of oil paintings are abstracted landscapes that mirror an unknown world navigated by intuition rather than vision, a sensibility Faiza Butt shares in intermingling narratives across intense global cultures with autobiographical elements in her ceramic and porcelain sculptures. Inspired by varying disciplines, cultural consciousness and histories of myth and reality, Shrimanti Saha’s writerly art practice endeavours to establish a unique yet interpretable self-identity, and such inspiration from books finds structural connectivity in Anoli Perera’s book art, which is imbued with a selective memory that tethers one to chains of personal–historical moments. Together, these works of art express the concerted as well as intuitive effort of reading oneself in the world, exploring acts of self-construction at various stages of cognition and through varied contextual inclinations.