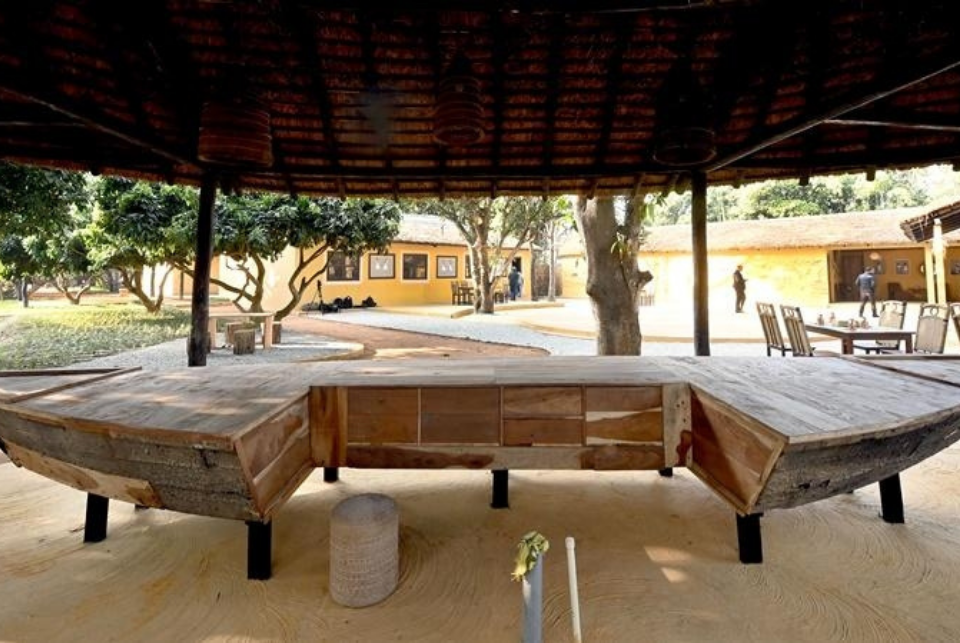 In response to disappearing cultures due to increased urbanization and modernization, Nepal’s Chaudhary Group, through its foundation, has established a ‘Unnati Cultural Village (UCV)’ at Harkapur, Nawalpur. The goal of the village is to offer a place where Nepali artists and writers can visit and create their art and literature, said the Chaudhary Foundation.

Spread across approximately six bighas of land, the village houses a Nepali Arts Museum. An Art Center has been set up for the promotion of art and literature. Kala Ghar, where artists can stay and create artworks can also be found once inside the Village.

There are restaurants, guesthouses and rooms that reflect Tharu culture at UCV. The structures are adorned with paintings of various Tharu festivals and celebrations. The essence of Tharu culture and community is engraved in this cultural village.

Located 12 kilometres away from Chitwan’s Narayangadh Bazaar, it is a culturally significant Tharu Village with a Tharu Dabali and Tharu Bar within the premises. Other structures too have been named in Tharu language. Not just Tharu culture, other cultures too are represented in the Village.

The UCV was inaugurated on March 12.

Speaking at the inauguration, Binod Chaudhary, Chairman, Chaudhary Foundation mentioned that UCV has finally come to fruition after years of tireless efforts. “Art, literature and culture are the foundations of any society. If we do not strengthen these foundations, the future generations will forget about it, “he said, adding, “We have established Unnati Cultural Village keeping in mind the present and future generations.”

Chaudhary mentioned that his interest in Nepali arts piqued around five years ago when he saw Nepali art at museums set up by World Bank sponsored Asian Heritage Foundation. The World Bank had provided financial support of 40 million dollars to Asian Heritage Foundation. “I saw some Nepali arts and crafts there. But, I could not find it in Nepal. That’s why my efforts are directed towards conserving such arts”.

Chaudhary stated that art, literature and culture can only be revived if they are linked to the economy, and UCV is a step towards that end.

The Foundation hopes to open cultural centres across all seven provinces and says that UCV is a pilot project.

“Since the beginning we felt the need to invest in society. We have been working in various sectors including arts and culture, social economy, disaster management,” he said, adding, that Unnati Cultural Village is a continuation of those efforts.

An art gallery within the premises of UCV was also inaugurated. The Village will have a Cultural Multipurpose Hall, where cultural banquets, gatherings, meetings, and cultural exhibitions can be organized. A separate space has been assigned for ‘Kala Batika’, with 18 places identified for the ‘Open-Air Museum’. Artists can create artworks and exhibit them here.

The Village will also produce various local handicraft tools. There are plans to produce skilled manpower and bring the handicraft products to the market. A ‘History Museum’ has also been set up to arouse interest in Nepali Arts and Crafts. The museum will showcase ancient, medieval, and modern Nepali crafts.

Besides Tharu community, the Village will also incorporate the cultures of other communities including Majhi, Bote, Darai, and Magar, from the Nawalpur region. Dances like Ghatu and Sorathi will also be performed at the Village.

While the concept of Village has led to job creation, it will also increase self-employment. The Village offers opportunities for self-employment. And, with the motive to involve the local population, the Village has employed local people and they are at the forefront from handicraft production to hospitality, said Chaudhary Foundation.