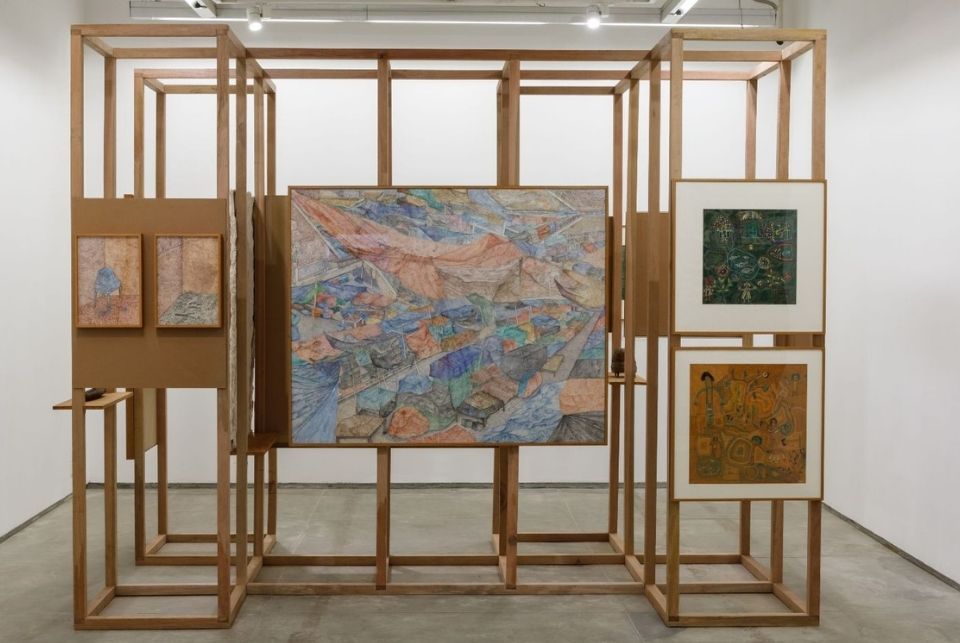 Nestled brings together the works of sculptor and painter Adip Dutta and the revered artist late Meera Mukherjee, revisiting a layered and nuanced relationship between them. Although generationally apart, Mukherjee’s influence on Dutta’s work was formative to his visual language and the exhibition attempts to underscore a lesser known, yet important, dialogue between them. Ensconced within the studio and influence of Meera Mukherjee, for Adip Dutta, the early conversations with his “Meera Mashi” birthed a way of thinking and looking that became the cornerstone of his practice. Nestled orbits a space of dialogue, of times spent together, of influences formed through a wide range of experiences, and of foundational moments of lucidity for Dutta and a loving, yet restrained, mentoring by Mukherjee.

Meera Mukherjee, known for her incredible use of folk tradition and indigenous practices, experimented with several materials and forms in constructing a language for her work that bound together the myriad influences of an awareness of her country’s traditions and crafts. Incorporating them within her own practice and intimately rooting it to her thought process, Mukherjee truly embodied a complex language that was entirely her own. In her words, “It was the heritage, which had in a thousand ways moulded me”. Using the stitched kantha, as a point of entry into the exhibition, Nestled presents a body of hand-embroidered work that emerged from Mukherjee’s constant push in imbibing and expanding processes juxtaposing them with Dutta’s works on paper, sculptures and drawings. Mukherjee made drawings with children that grew into kanthas; instructed by her and made in collaboration with skilled craftspeople which then took shape of hand-woven carpets.

Each practice carries forward a knowledge system and a shared tradition to the next, bringing together experiments that exhibit the harmonious flow of the evolving practice between groups of people and the creation of a whole language. Dutta’s time spent with Mukherjee in his teenage years and as a young artist in Mukherjee’s studio had an undeniable influence in way of representation, in way of seeing the world around him and the transposition of his vision to his practice. In Dutta’s repetitive mark-making within his drawing, the relationship between Mukherjee’s kantha stitches flexible, moving, curvilinear lines where small lines, dots, dashes and points are used as common devices to form the narrative become instantly visible.