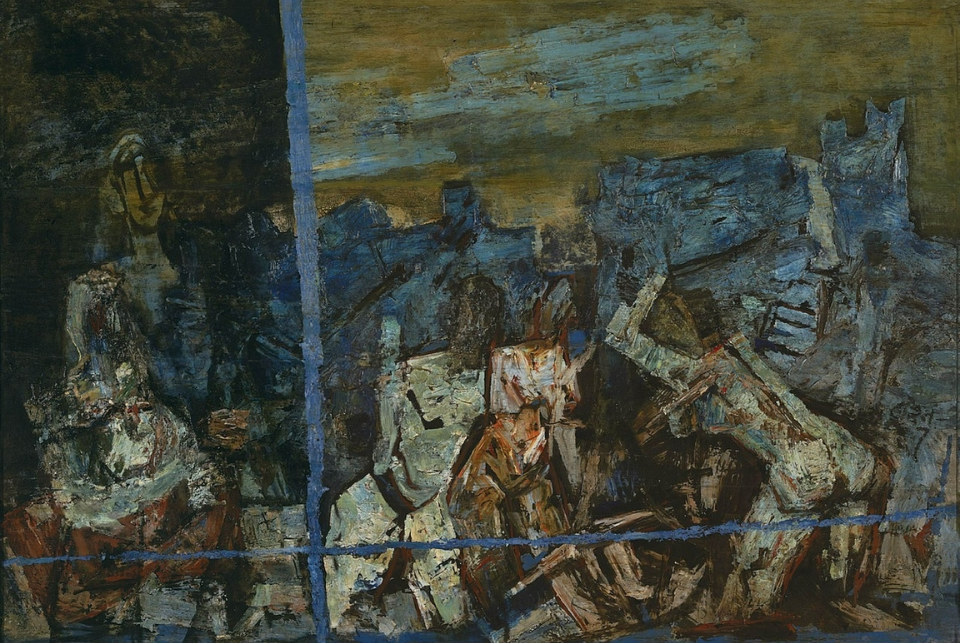 Two monumental oil on canvases by leading modernist V S Gaitonde from 1970 and 1971, each estimated to sell between Rs 12-16 crores, are set to go under the hammer at an online AstaGuru auction on March 30-31.

According to a statement by the 2008-established auction house, both of Gaitonde’s works featuring in the Modern Indian Art online auction come from a highly significant period in the artist’s career when he was considered to be in his most productive and experimental phase, during which his work style completely journeyed towards abstraction. Gaitonde’s paintings from the 70’s embody the principal technical methodologies, as well as the ideologies of Zen Buddhism he had adopted as an artist over the last decade.

Gaitonde’s work from 1970 takes on a minimalistic approach featuring a largely subtle overtone with abstracted forms painted in deep blacks that appear to float on the canvas and break the monochromatic composition of the painting. The second work truly showcases Gaitonde’s control over the medium and his mastery on the canvas to achieve a vivacious creation of earthy overtones with bright patches of orange that seek to break through its surface, said AstaGuru.

The late March auction also includes a fine selection of 30 eminent works in the Modern Indian Art space from masterpieces by stalwarts such as V S Gaitonde, Tyeb Mehta, Akbar Padamsee, Manjit Bawa, Jogen Chowdhury, and Jagdish Swaminathan, to never before auctioned creations by K H Ara, M F Hussain, Krishen Khanna, Bikash Bhattacharjee, Anjolie Ela Menon, and many more artists. According to AstaGuru, some of the works on sale are making their auction debut.

Tyeb Mehta’s Untitled masterpiece from 1981 will also be on sale at an estimate of Rs 12-16 crores. The painting is a significant work from the artist’s oeuvre and acts as a transitional piece and a precursor to his later explorations with the themes of the rickshaw puller which became an important subject of his work. Mehta’s work took on a transformation following his encounter with minimalist art during his stay in New York in 1968, when his approach changed to well-structured minimal fields of colour which were technically executed, shared AstaGuru.

It added: Jogen Chowdhury’s ‘Story of Woman’, a mammoth work from 2013, is one his largest and most important paintings till date. Estimated to sell at Rs 3.5-4.5 crores, the work of monumental proportions narrates a fable which revolves around the sexual tension which looms over the relationship of a man and woman, with the woman being the central protagonist. The scale of the painting and subject matter is vast to the extent that the artist had to work on 5 panels which extends to 25 feet in length in order to etch the essence of his thought process and observations. The theme of sexual tension between a man and a woman has been a point of contemplation for Jogen Chowdhury for an extended period of time, however this painting is an outcome of totalitarian thematic distillation.

Making its auction debut, is an early work by M. F. Hussain titled ‘Blue Ganges’ from 1966 — one of the few rare compositions that the artist executed on wood — is estimated at Rs 1.5-1.8 crores, said AstaGuru. In this work, the artist captures the mystics of the ghat and the people partaking in the ritual of bathing in the holy river. The dense sensation of the ghats and its unique geological terrain is effectively established.

Another painting in the sale is an extremely rare work titled ‘Aaj Ka Insaan’ by India’s foremost modernists K H Ara from the personal collection of his daughter Ruxana Pathan. Ara who was predominantly concerned with the nude form and still-life genre deviates towards an extremely ponderous approach in the presented work. It is estimated to sell between Rs 50-60 lakhs.

Another auction debut estimated at Rs 40-50 lakhs, is of a beautifully arresting, ‘Untitled’ painting of a female protagonist from the limited oeuvre of Hemendranath Mazumdar, who became one of the few Indian artists of the early 20th century to gain monetary as well as critical appreciation for this work. As part of his formal training, Hemendranath mastered the Western Academic style of painting adapted to an Indian subject matter as a whole, and female portraits in particular. Bathing women or those partially draped in wet saris became the artist’s most revisited subject matter. He became a highly revered painter in the Kolkata art scene in the 1920’s.

According to Tushar Sethi, CEO, AstaGuru, “a majority of the works in this auction have been part of significant collections for decades and it is an absolute pleasure to be introducing them into the auction market for the very first time. With masterpieces from renowned artists like Gaitonde, Tyeb Mehta, and Hussain, to artworks from the limited oeuvre of Hemendranath Mazumdar, Rabindranath and Gaganendranath Tagore, this catalogue has been painstakingly crafted for seasoned buyers looking to add unique works to their collections.”

The auction will take place online on www.astaguru.com on March 30-31.