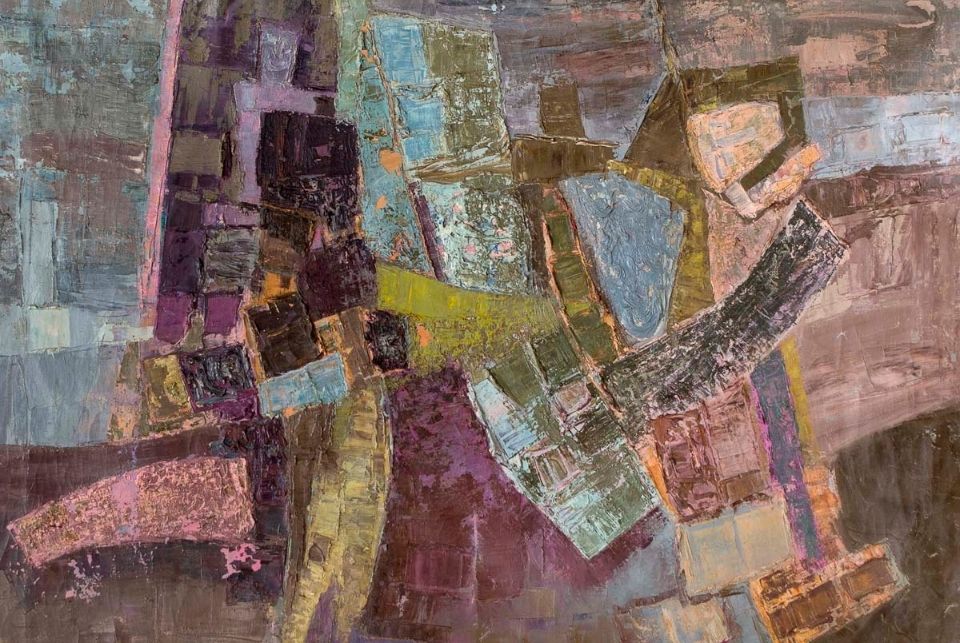 In the discourse of modern Indian art history, the name of artist Naval Jijina is seldom recounted as those of his other famous contemporaries. A recluse Parsi abstractionist in Bombay, who in his ‘Aerial Views’ is not painting abstract landscapes atop of an aeroplane but rather his aerial visions arise from a play in colour, Naval Jijina is a painter, photographer and musician who interlays his interests in mythology, music and textile design through painting.

In one of major retracing of Jijina’s artistic legacy, Art & Soul Gallery is hosting an exhibition titled ‘The Music Modern,’ which is the first viewing of a solo show by the artist Naval Jijina where he proposes a lifetime of works that intertwine painting colour with classical Indian music. The exhibition is a part of the ongoing Mumbai Gallery Weekend.

Born in Surat, Gujarat, in 1929, Jijina was an orphan boy who was trained to be a Parsi Priest. However, he joined the Sir JJ School of Arts, Bombay from 1956 to 1962 where he studied mural painting under Baburao Sadwelkar. Here under the influence of Shankar Palshikar, who built his legacy on painting the abstract devoid of an occidental consciousness and intertwined Paul Klee with the tenets of Indic Mythology and miniature painting, Jijina became a colour alchemist and started experimenting with color.

Like many other artists of his times, Jijina also challenged the colonial pedagogy and joined a select group of artists such as Syed Haider Raza, Vasudeo Gaitonde and other abstractionists from the Bombay School of arts in experimenting with colour.

In first solo exhibition, across the three galleries of the Jehangir Art Gallery in 1962 titled ‘Life of Zarathustra,’Jijana depicted the epics of Zoroastrianism with his figurative works.

“He saves his work from being conventional through uninhibited impasto. (Yes, even abstract art in this country has become conventional owing to an excess of the genre.),” Nissim Ezekiel wrote about the show in his August, 1975 in the Times of India.

With the support of the sponsors, the show travelled to Udwada, Navsari, Surat and Ahmedabad. The paintings in the exhibition then went on to be acquitted by the ‘Zoroastrian Society of London. In 2019 a painting on a Zoroastrian mythological tale the ‘Behram Yazad was commissioned and purchased by Dr. Pesi B Chacha and donated to the Parsi Community Hall in Singapore.

However, as a Parsi priest he started to be wary of his belief overlapping with his vocation and so quitting priesthood he began his experiments with painting abstractions that he called ‘Aerial Views’

‘Aerial Views’ abstracts that emerged in the 1960s from the JJ School based upon Shankar Palshikar’s discourse on Indian spirituality and Paul Klee also won Jijina won awards from the Bombay Art Society and the Artist Centre in 1968.

Jijina also established the ‘Everyman’s Gallery’ in 1968 under the patronship of Dr. Pestonji Behramji Warden on Princess Street to allow artists like him to find a free space for exhibitions.

Before joining Sir JJ School of Arts, Naval Jijana was a student at Nutan Kala Mandir. It is here, he came under the influence of Hindustani Classical Music and ended up passing his first-year exam in tabla playing.

Also an avid photographer, Jijina joined the Photographic Society of India under the influence of Rustomji Belihomji and merited in form of colour transparencies with photography.

One of the biggest collaborators for Jijina in his artistic pursuit came to be his wife Gool Jijina. A part time artist herself, Gool painted similar portraits holding the same anatomical vigour that came from the Sir JJ School of Arts.

Keen to continue and retrace his paths to mythology, Jijina practices in Andheri Mumbai with much help, conversation and inspiration from his partner Gool Jijina.