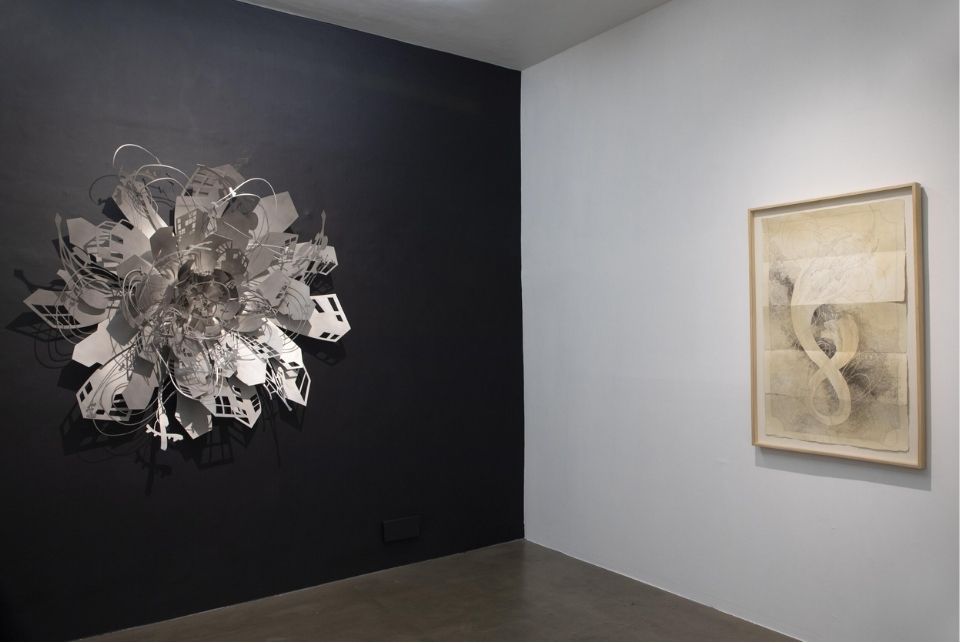 He calls the art of cutting paper meditative. He smiles that whenever he starts doing that, it is tough to take him away.

For Bangalore-based artist Sachin George Sebastian, whose latest show, ‘Once, there was a seed’ at currently on view at Vadehra Art Gallery in the capital, the fascination for the medium started when he came across a pop-up book in a second-hand book store in Bangalore. “That was the first time that I was something like that, and it left me stunned. I kept wondering how can something three-dimensional come out of a book…”

Talking about his latest exhibition, which showcased drawings and sculptures made using paper and steel, the artist who showed last in 2015 (also at Vadehra) said that that was the year his first baby was born, and he started questioning the purpose — of everything. “What is my purpose as an artist, human being, a parent, how do I balance life and work? Every year brings a set of new experiences, the focus keeps shifting and newer thoughts take priority. For the past five-six years, I have been drawing a lot.”

In fact, Sebastian was supposed to hold an exhibition in April last year but that could not materialise owing to the pandemic.

Being a hands-on person, the artist also has also employed his skill-set beyond art, said, “At one point of time, I also did a freelance project in Jaipur for a paper company wherein I made all the products collapsible, so they could be shipped in a large quantity together. Besides, I was applying this paper-engineering technique into other products and things.”

Now settled in Bangalore, he wants to tell stories using those techniques, outside the book format. While he keeps working with paper as an artist, he also explores other materials.

Talk to him about his work in steel, and the artist says that while paper has become the material for him to consistently explore more, considering its tactility and texture, it becomes framed in a box. “Like, a wooden box — you can’t feel the texture anymore. Fifty percent of the world’s steel is used for making buildings, in construction. So, when I make work out of steel, I can have it outside the frame. This time, I feel I was finally able to get the texture, frame and fluidity that I get out of paper into steel.”

Originally from Kerala, the urban landscape has always finds a prominent place in his works. “My journey has taken me to Ahmedabad, Bangalore, Jaipur and Delhi. And then going for projects in Gurgaon. And you know, other than this scale that the cityscape boasts of, there’s also a big difference in people — from city to city. And that fascinates me. How does the city affect people living in its embrace? Everyone complains about their existence in the city but people keep coming to it. And I couldn’t understand this. It’s not so easy living there, but it provides for them. It is something very beautiful. In my previous works, it is more like a carnivorous flower. Like, it attracts its prey, and finally consumes them – but it’s not chaotic. That is what I was trying to refer from government paperwork earlier. Sometimes, people complain about the wires getting entangled, and the streets. Isn’t it beautiful? Like, if you see a photo, you can immediately tell that — that’s from India. That’s not Dubai, or anywhere else.”

Stressing that he is essentially a storyteller who tells tales through his visuals, “Stories force us to imagine. I read and write. However, there are things that I just cannot express in words. Guess that is why I started making visuals, became a visual storyteller.”

This interview has been republished from a news agency article feed.