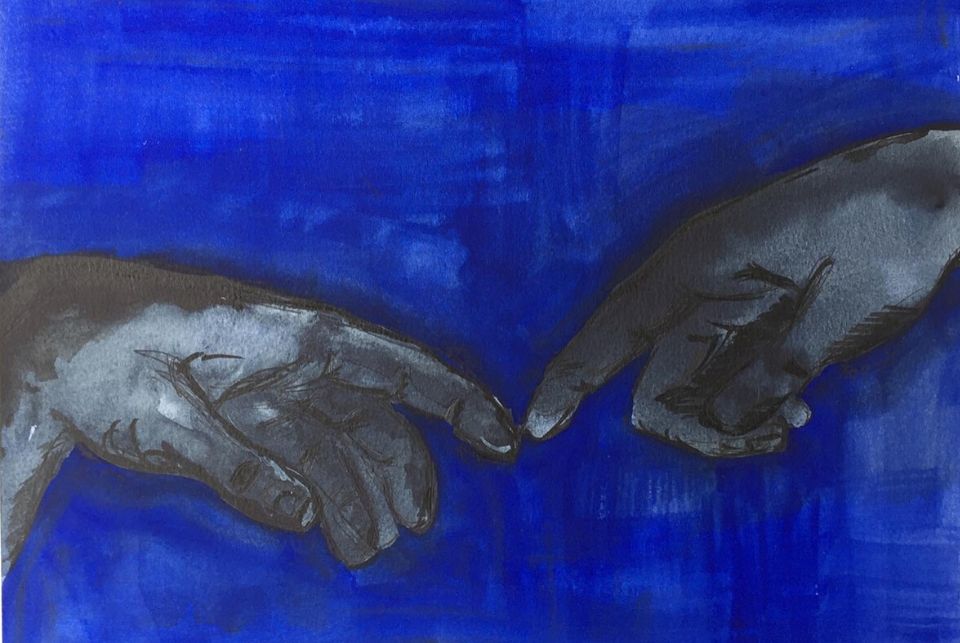 For me, a decade-long exploration of material like charcoal and natural fibers has been very meaningful and exciting. I could dwell in some of the concerns that affected most of our lives and personally; it was both learning, exploring as well as visually/culturally locating the self. To share these visual explorations through exhibition platforms is my means for engaging with the society.

As a trained painter, my natural order of thinking is through drawing; and the notion of thinking three-dimensions was new to me. Eventually, through the heuristic of drawing, I was able to visualize and approach three-dimensional imagery. Each of my sculptures and installation work is the by-products of this evolution, requiring years of drawing to shape into the pragmatic form. Most times, the form emerges with forethought how the material will engage at a conceptual level.

In the work Argya/Drop, there were three streams of thought that I visualized: as a drop falling into the still water on the banks of river Ganga; people en masse offer handfuls of water; Argya, to the river as a daily ritual to the sun. It is also a reminder that one day, we all will be dissolved into a larger element. The columns of falling water and their verticality was an intriguing element to work with.

Secondly, re-looking at the temple structures and sculptures around us made me realise how our education and society were pressed towards modernity and its material language. We barely recognise the intricacy and complexity of sculptures and their embellishments that we achieved in stone. I picked up a basic pattern from them as a representative part of the decorative motifs.

Thirdly, the material bamboo which is now used for burning to achieve high temperature in the energy sectors is a rigid material. Creating a fluid form of a water drop was an opportunity to push my understanding of the material which, in turn allowed me to explore a few more of its plasticity dimensions.

The series ‘Hands’ was a thought process developed through my observations of Bangalore in the early 1990’s wherein I witnessed the city growing off the efforts of invisible working hands and voices. It forced me to introspect and understand the efforts of people to relate to their new environment, and I saw it as a relationship between outsourced labor and capitalism. In the rosy picture of growth, the environmental distress was inevitable, wherein I felt, no region or community will be isolated from its effects.

The invisible touch that sparks the connection in the painting of “Birth of Adam” at the Sistine Chapel served as a personal metaphor for the way outsourced work connected the world to the city of Bangalore. With the new environmental situation both Adam’s and God’s hands fall on the floor, both overworked and burnt, expressing the vulnerabilities of being mortal.

Shanthamani M has studied art from CAVA, Mysore and Faculty of Fine Arts, M S University, Baroda. She was awarded Charles Wallace Scholarship to study a year long paper making at Glasgow School of Art, Glasgow, Scotland. She has exhibited her works at solo and group shows exhibited widely including art fairs and curated platforms both in India and abroad. She has been part many national and international residencies and art camps.

Shanthamani’s practice of more than two decades involves many media such as painting, sculpture, installation, printmaking and paper-making. She is also involved in interdisciplinary teaching for art and design students.

Shanthamani’s practice of more than two decades involves many media such as painting, sculpture, installation, printmaking and paper-making. She is also involved in interdisciplinary teaching for art and design students.