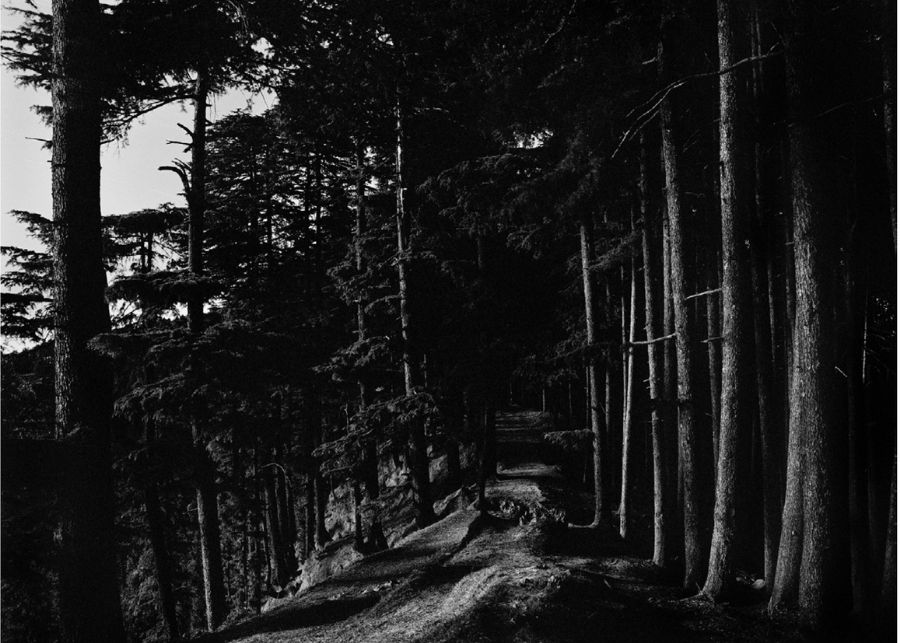 The photographer Dileep Prakash’s series, Sleeping in the Forest features British-era rest houses in Himalayan jungles: the black-and-white images of moonlit forests and bungalows limned by an intense otherworldliness. The prints (all Untitled, 2007–2016) loom large, their size befitting the architectural and arboreal solidity on display.
These bungalows made an impression on Prakash when he stayed in them as a child, and he has been photographing them for years, imbuing his images with a melancholic texture. Medium-long shots of atmospheric landscapes frame a high-contrast theater, the use of long exposure causing firefly-like light streaks of various shapes. The chiaroscuro of white facades and dark foliage is leavened by a subtler choreography of light: the bulb left on, the door ajar, the lichen on tree bark, a slice of sky.
Shooting under the moonlight imparts an obvious intrigue to pictures; they are rescued from banality by the way in which the exposure suggests a reflective period of anticipation. It is in this longueur that Prakash’s history with the terrain comes into play, phantomlike. A country path vanishes into a bend; deciduous trees slant sharply on slopes; and certain angles at which the houses are photographed suggest a haunting.
Forests are a trope in the South Asian aesthetic canon—in epics such as the Ramayana and in Mughal miniature paintings, for example. In Prakash’s work, they become a site of tension between self-knowledge and the unknowable nature of the world.
Text: © Artforum, February 21, 2018, “Dileep Prakash,” by Kamayani Sharma.