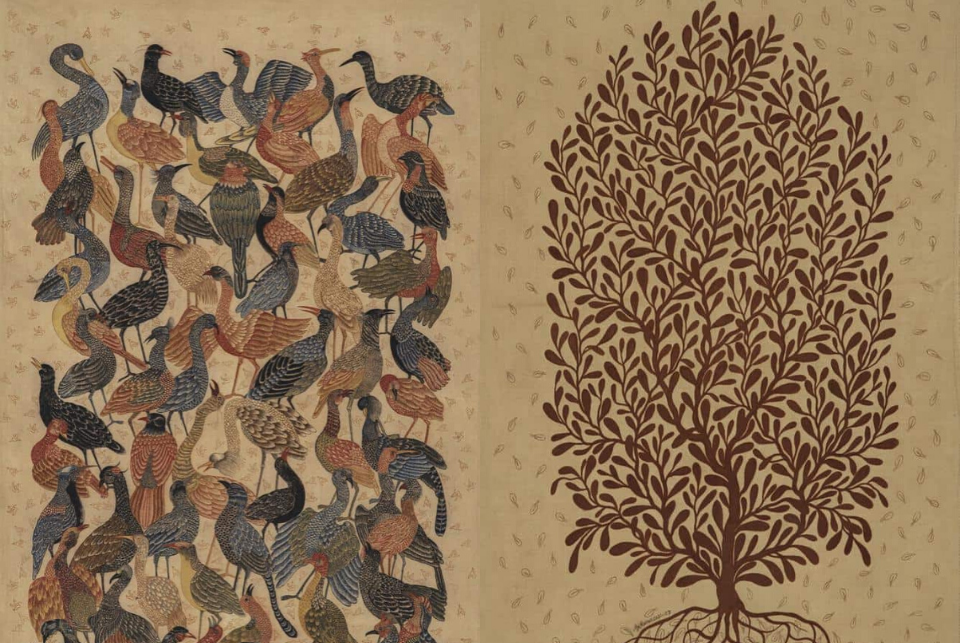 The work of Ajit Kumar Das spans four decades of explorations in textiles. This oeuvre ranges from painting with the use of kalam or bamboo reed, block printing to natural dyeing; from expressively intricate botanical drawings, animals and birds, to abstract forms with bold use of colour and calligraphy. Together, they can be seen as part of long traditions of painted and printed textile arts from the Indian subcontinent over several centuries. Das picks up various strands from their diverse repertoires, simultaneously, however, evolving a distinct vocabulary quite his own.
This selection of hand-painted works represents Das’ long engagement with flora and fauna, which began as an artist at the Weavers Service Centres, established by the Government of India in the early decades of independence.

It was through here that Das came to learn from among the most accomplished textile experts and artists in the country; the natural dye master C Chandramouli, the educator K G Subramanyam and the curator Martand Singh, among others. It was also from here that he became involved with commissions for Vishwakarma, a landmark series of textile exhibitions from the late 1970s to early 90s.
Das is one of a few from the group of artists involved with the Weavers Service Centres, who upon retirement, went onto develop an independent artistic practice in textiles. Since then, he has exhibited widely, and his works have been acquired by important private and institutional collections in India and abroad. Based in Kolkata, West Bengal, he has lead workshops on natural dyeing and regularly mentors students and the next generation of artists. Das’ practise is particularly noteworthy for extending the understanding of Kalamkari — conventionally associated with painting using a kalam or bamboo reed and natural dyes in Andhra Pradesh — beyond its community-oriented, regional identity, as an individual’s art form in its own right.

Text and photos: Gallery Art Motif.
The Art of Hand Painted Textiles: Ajit Kumar Das will be on view from January 20 through February 15, 2020.