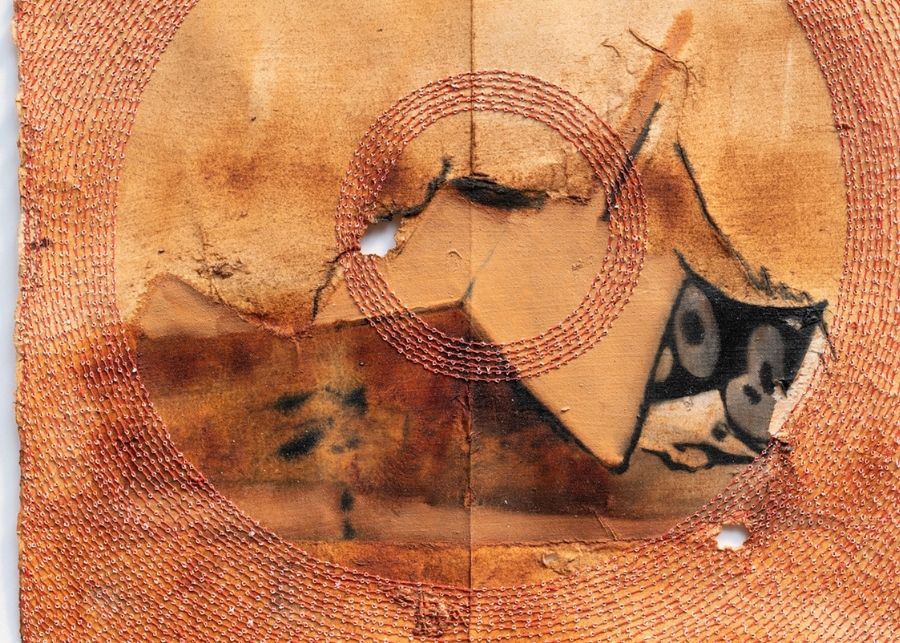 Straddling a space between multiple polarities, Radhika Khimji’s work is at once a painting, a drawing and a collage; it is also an embroidery and a sculpture. Khimji’s solo exhibition, Traces of Deconstruction brings together her layered practice in exploring categorisation and identification, often playing with terms and the naming of things to generate a new narrative for an object and render it abstract from its loaded history.

To break the binary opposition in the viewing of her work, Khimji uses deconstruction and manages to expose a trace. This is not a trace of the oppositions that have since been deconstructed. Instead, the trace acts as a rupture within her own practice leading to a kaleidoscopic shift in the reading of the image. A pattern emerges in the body of work where the materiality of her process rubs against the non-material and the implied, further underscored by their specific titles. Deconstruction, layering and distortion are used as tools to juxtapose the existing polarities in Khimji’s work as best they can.

Process, therefore plays a strong role in her exhibition Traces of Deconstruction, informed by the physicality and materiality of making, eventually evading the constructions of formulated identities.

Radhika Khimji (b. 1979, Oman) holds a BFA from Slade School of Art, London, and MFA from Royal Academy of Art, London and an MA in Art History from University College, London. Her work has shown at several group and solo exhibitions worldwide and can be found in collections both private and institutional.