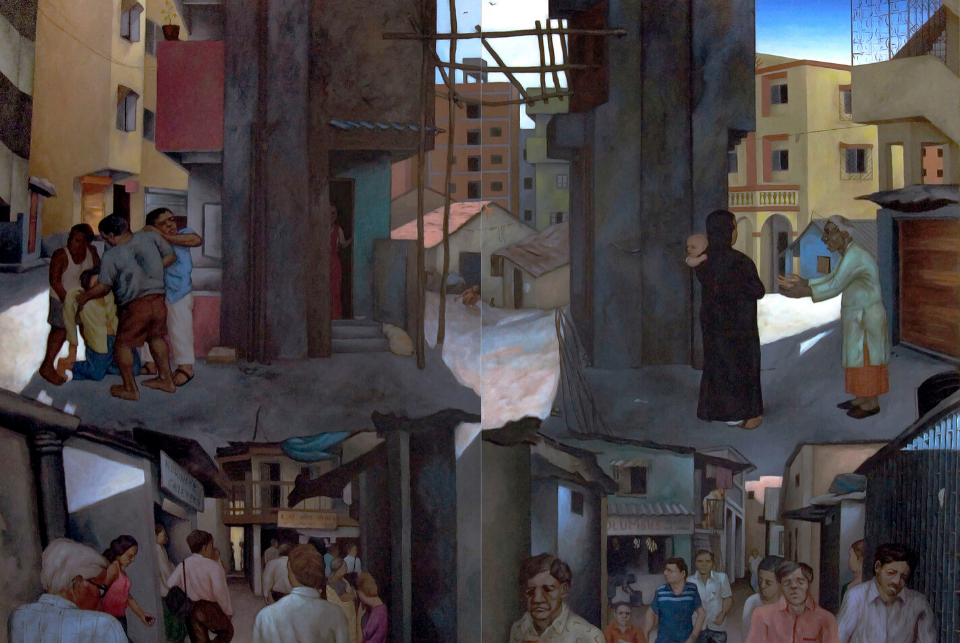 The Modern Art, Mumbai is hosting an exhibition ‘Walking Through Soul City, Sudhir Patwardhan: A Retrospective’, supported by Guild Art and curated by Ms Nancy Adajania. The exhibition will include a range of public engagement programs such as panel discussions, guided tours, publications and social outreach with underprivileged children.
Over two hundred significant artworks, spanning over five decades have been included in this retrospective. A number of these works have been loaned, both from public and private museums, including private collections making it possible for the curator to access rare iconic works for this retrospective. Three of the artworks are from NGMA‟s collection.

Excerpt from Curator’s Note
“Patwardhan was socialised in Marxist thought in the early 1970s while studying medicine in Pune. He chose to become a radiologist and set up practice in Thane while continuing to paint and exhibit regularly. Inevitably, then, he brings his scientific training to bear on his artistic practice, experience his scalpel-like observation of physical abnormalities. But equally, he brings to his works an intense hope for a unified field, an affinity for Platonic solids and impossible objects that are all the more real for being optical illusions. I would argue that Patwardhan‟s art is propelled by the constant interplay between a palpable materialism and a philosophical idealism.
One of the recurrent tropes in Patwardhan‟s work is that of walking. Walking as an existentialist declaration or a traversal of treacherous ground, as an expression of solidarity with dissenters. Above all, walking as a construction of reality through the revisiting of memories, observations and desires. I would contend that this love of walking has made him approach the landscape, not as a genre construct, but as an enactment through meandering. […]
This exhibition, which includes many rarely seen early works, testifies to all the major shifts in Patwardhan‟s oeuvre, from the Bombay riots in 1992 to the onslaught of the forces of globalisation and the fragmentation of class solidarity, to his growing awareness of his own vulnerable, ageing body and spectre-possessed mind. Hope, we know, is not verifiable. Yet it is transformative hope that Sudhir Patwardhan holds close to his heart, even while history asserts its inexorable claim”. – Nancy Adajania
Patwardhan was born in Pune, Maharashtra in 1949 and graduated in Medicine from the Armed Forces Medical College, Pune in 1972. He moved to Mumbai in 1973 and worked as a Radiologist in Thane until 2005. He took to full-time painting from 1975 onwards and held his first solo exhibition in 1979. In 1982, he was one of the six artists in the exhibition Place for People, a landmark show in Indian Art history which initiated a new concern with social issues in art.

Walking Through Soul City, Sudhir Patwardhan: A Retrospective will be on view from November 30 2019, through February 12, 2020.