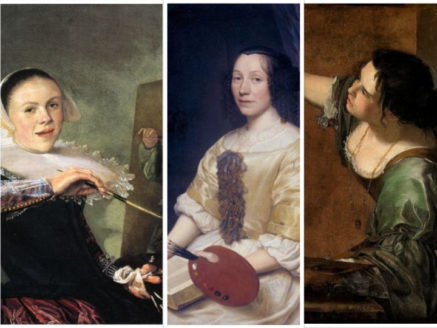 Had it not been for the Dutch collector and art historian, Cornelis Hofstede, we may not even know Judith Leyster. That is because, for many years before Hofstede recognized her distinct JL monogram in 1893 below the painting The Happy Couple, most of this great artist’s work had been attributed to Frans Hals or to her husband, Jan Miense Molenaer. A great find of the Dutch Golden Age, JL painted still lifes and specialized in portrait-like genre scenes of, typically, one to three figures, who generally exude good cheer, and are shown against a plain background. It is also said that Judith Leyster was the first woman member of Haarlem Guild of St. Luke.

Although very little of her is known today and only twenty-six of her paintings survive, Maria van Oosterwijck was an extremely talented painter of her time who specialized in richly detailed flower paintings and other still lifes. also fervently promoted her work by obtaining art agents to market her pieces abroad. With an international reputation, she found patrons in kings such as Louis XIV of France and William III of England. In fact, secretary to Prince Frederick Hendrik wrote a whole poem in her praise. Through the use of symbolic elements, her paintings reflect themes commonly found in Dutch still life of the 17th-century, such as vanity, impermanence, and the obligation to devote oneself to God.

In an era when women struggled just to paint, English painter Mary Beale was successful enough to financially support her family through her art. One of Britain’s earliest professional female painter, Mary started in the 1670s and carefully picked whom she would paint. She used the praise of her circle to build a good reputation. Some of these people included Queen Henrietta Maria and John Tillotson, a clergyman from St James’ Church, a close friend of Mary Beale who eventually became the Archbishop of Canterbury. The largest public collection of her work can be found at Moyse’s Hall Museum, Bury St Edmunds, Suffolk. In 2013, Tate Britain had put on show two newly discovered works by her.

One of the most famous woman artist in early modern Bologna, Elisabetta Sirani produced over 200 paintings, 15 etchings, and hundreds of drawings. Considering that she died at the young age of 27, the works created by her make her an extremely prolific artist of her times. Her works cover a number of subjects, including historical and Biblical narratives, often featuring women, allegories, and portraits. Sirani was also the first female artist to specialize in history painting, a style that many other female painters that Sirani trained also followed. She also established an academy for other women artists.

With her successful career spanning over six decades, Rachel Ruysch is one of the best known and best-documented woman painter of the Dutch Golden Age. A still-life painter from the Northern Netherlands. She specialized in flowers, inventing her own style and achieving international fame in her lifetime. Art historians consider Ruysch to be one of the most talented still life artists, regardless of gender. The first woman to be offered membership in the Confrerie Pictura, Rachel Ruysch by her death at age 86 she had produced hundreds of paintings, of which more than 250 have been documented or are currently attributed to her.