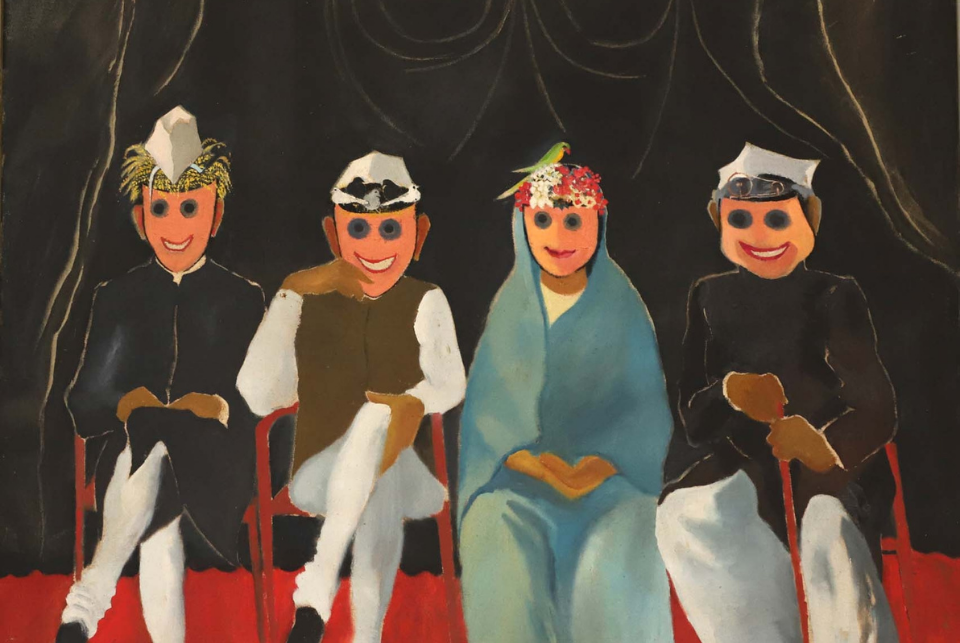 The exhibition has been conceptualized by FAQ Art and curated by Eka Archiving. It is on view till July 31.

Founded by artists whose lives were ripped apart by the Partition, the Chakra became a haven of free thinkers and new ideas in the stilted cultural milieu of 1940s New Delhi.

These artists gave root to modernism in the capital’s art circles and laid the foundation for the commercial gallery system in India. The Silpi Chakra Gallery founded in 1949, later became the Dhoomimal Gallery.

The Delhi Silpi Chakra was formed in March 1949 as an answer to the woes of artists in Delhi, who felt the need of a platform and association which would be progressive and encourage new ideas. Their slogan, “Art Illuminates Life”, was to further the idea of art in the everyday lives of people and build a space for ideations in the capital of independent India.

Along with the Silpi Chakra, the Dhoomimal Gallery played a crucial role in the development of the modern art movement(s) providing an early platform and much needed patronage for new voices. This exhibition includes artists who actively engaged with the Silpi Chakra as members, founders, office bearers, and associates over the years. More than 7 decades later, presented is a nuanced re-look at these artists, some known and others less so, who came together in post-Independence Delhi and went on to significantly influence the trajectories of art in India in the second half of the 20th century.

The Delhi Silpi Chakra was founded by B.C. Sanyal, Kanwal Krishna, K.S. Kulkarni and Dhan Raj Bhagat — in search of hope and a space for art and artists in the capital city. Given the rupture caused by Partition, and the suffering experienced by many refugee-artists, the creation of the Chakra was essential for culture to emerge again. The Shankar Market space became an “adda”, for artists, musicians, writers, poets, dancers, intellectuals, and art-lovers.

The group played a crucial role in creating the critical mass that created and furthered the cultural and intellectual landscape in Delhi. The Silpi Chakra was vital in building an all encouraging vibrant atmosphere, ideal for intellectual, and artists’ pursuits as a space for not just cultural evolution but revolution. The Delhi Silpi Chakra, unlike the Bengal School or the Bombay Progressives, did not share a stylistic ideology, sharing, rather, a desire to make art accessible to the masses; to create a democratic platform for ideas and culture to flourish.

With an idea to take art to the masses, Delhi Silpi Chakra artworks were sold to lawyers, teachers, writers, poets, musicians, actors etc. Exhibitions were held in “mohallas” of Karol Bagh, Chandni Chowk, Jantar Mantar, and the grounds of the Masonic Hall.

Eventually the Silpi Chakra settled at 19-F Shankar Market. Artists from different parts of the country were invited to take part in events, with the group even coming up with a novel scheme of renting artworks. The group functioned as an art training centre, with regular classes taken by established artists; at the same time, it became a space to promote younger artists. Some of the Silpi Chakra’s art curriculum was designed by J Swaminathan.

At the same time, poets and writers like Nirmal Verma, Prayag Shukla, musicians like the Dagar brothers, art critics and historians like K. B. Goel, Charles Fabri, and Richard Bartholomew frequented the Chakra. Gradually, artists’ lives became busier, the collective gave way to increased individuality and newer avenues presented themselves; the Delhi Silpi Chakra dwindled: all that now remains is the painted sign board at the bottom of the stairs at 19-F Shankar Market.

“The Chakra also sought to create an agency through which the sale of works by its members could be organised on a commercial basis. Thus, the Silpi Chakra Art Gallery, the first of its kind in India, was inaugurated on October 7, 1949 on the mezzanine floor of Dhoomimal Dharamdas in Connaught Place, with the assistance of its proprietor, the late Ram Babu,” says P. N. Mago, Co-founder of Delhi Silpi Chakra.

Dhoomimal Art Gallery has been a landmark in the heart of Connaught Place since 1936. And now, it has undergone a complete transformation, reopening as a two-storey interactive experience.

Established in 1936, the Dhoomimal Art Gallery, one of India’s oldest art galleries emerged from the very needs of the artists of Delhi. Struggling to buy art supplies, they frequented the store of Ram Chand Jain, Dhoomimal’s proprietor, fondly remembered as Ram Babu. He encouraged artists to take the supplies they needed; in exchange they began leaving him with some of their work.

The mezzanine above Dhoomimal Dharamdas began to function as a gallery for artists to show and sell their works. In time, Ram Babu began to showcase the works of the emerging Delhi Silpi Chakra artists becoming an intrinsic part of the Delhi art circle in his own inimitable way. Today, more than eight decades later, Dhoomimal reaches out to a newer generation of artists and art lovers by hosting a Delhi Silpi Chakra retrospective at these historic premises.